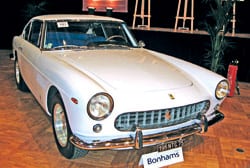 Part I: More seats, less money. The early 2+2s
In the late 1950s, Aston Martin and Maserati found a very lucrative market niche supplying GT cars to owners who wanted to bring the occasional extra friend or children along for the ride. While Ferrari had built four-seaters with bodies by Ghia, Touring, and Vignale, they were compromised coupes, and so Ferrari, ever eager to pay the racing bills, built an all-new car from the ground up as a 2+2.

The 250 GTE was introduced in October 1960 at the Paris Salon, an evolution of the highly successful 250 series. The traditional frame was lengthened, the engine was moved forward, and the rear track was widened, giving usable rear cabin space. The defining 2+2 supercar of its era, a factory test car went from a dead stop to 100 mph and back to rest in 25 seconds, topping out at just under 140 mph, with 0–60 mph in just over seven seconds. Thanks to the stretched coachwork, the 250 GTE bodylines were more fluid and sporting than its shorter 250 PF coupe brother

Indeed, the 250 GTE 2+2 was the best looking Ferrari 2+2, with classical lines not matched until the modern 456 GT and 456 M. Nothing else in its era could match the 250 GTE 2+2 for space, grace, and pace, ushering in a new era of what was, for Ferrari, high-volume efficiency and mass-marketing. Between 1960 and 1963, just over 950 250 GTEs were built at a rate of around six per week, making the GTE a huge commercial success.

250 GTE: Problems, and on buying one
Any 250 GTE is on the wrong side of 40 years old, and all have suffered the ravages of time. Because of a complex and expensive-to-rebuild front suspension, an engine with poor casting quality and no valve guide seals, an overdrive that is a mystery to most mechanics, and the reality that every component on the car is well past its rebuild-or-replace date, the 250 2+2 has always been at the bottom of the 250 food chain. Rust-proofing was perfunctory at best, and so the 250 GTE was the donor car of choice through the late 1980s, with hundreds parted out to become 250 replicas of one sort or another. Owners tend to put off service work that over time becomes a study in deferred maintenance. What should be a $5,000–$10,000 service once every few years is put off for years and becomes a $25,000-plus deferred maintenance bill.

A project car is worth $75,000, yet the best on the planet would struggle to bring $145,000, making the search for the right car difficult, as the restoration needed to make a rough car into a show car is the same for a 250 GTE as it is for a 250 SWB. Very few owners have been dedicated (or foolish) enough to fully restore a 250 GTE, and so almost all have serious deferred maintenance issues, making the 250 GTE, and indeed all of the classic 2+2s, the poster children for a detailed pre-purchase inspection.

Launched in mid-1965, the Series II 330 GT featured a more attractive two-headlight design and a long list of updated features. The 5-speed was now standard, and a fiberglass floorpan eliminated much of the rust problem of the earlier cars. Power steering and air conditioning were also offered as extra cost options. Mid-way through production, Ferrari replaced the four-mount block with a new casting that had two engine mounts. Production continued until autumn 1967, by which time 460 examples had been completed. Total production for the 330 GT was 1,088.

365 GT 2+2: Pininfarina hits the mark
Launched in October 1967 at the Paris Salon, the 365 was well received and continued Ferrari marketing success with evolving 2+2 models. The 365 GT was clearly inspired by the GTC Speciale and Ferrari’s 500 Superfast, resulting in a nicely cohesive but overly large design. The imposing rear overhang made the 365 GT 2+2 the longest car Ferrari had ever made, earning the nickname “Queen Mother.”

Launched at the October 1972 Paris Salon, the 365 GT4 2+2 offered impressive performance and comfort for four adults but, as the predecessor to the 400 and 412, suffered from the same bland styling. While the GT4 sat on the longest wheelbase of any Ferrari, the overall length was still seven inches less than the “Queen Mother.” With 340 hp, the 4-cam GT4 was the world’s fastest four-seater with a top speed of 155 mph and a 0–60 time of just 6.4 seconds. The GT4 2+2 was by far the most spacious 2+2 yet produced by Ferrari, giving an airy interior for front and rear passengers. When GT4 production ended in late 1976, 521 cars and three prototypes had been built.

Launched in October 1976 at the Paris Salon, the 400 was an immediate success, despite doubts over the option of an automatic transmission. The 400 GT was little changed from the 365 GT4, with the major changes in the engine, now 4.8 liters, although power stayed at 340 hp. The 3-speed auto box worked well around town, although the lack of two extra gears hurt top end performance and top speed. Many questioned Ferrari offering an automatic transmission, but nearly two of every three 400s were automatics. Production ended in mid 1979, with 353 GTs and 770 automatics built.

400i: Injection is added

Because of tighter emissions laws, Ferrari introduced a fuel-injected 400 in 1979 that could be modified to meet stricter rules. The 400i engine was noticeably smoother and more refined but at a loss of 30 hp. Power was down to 310 hp and top speed below 150 mph. Production of the 400i ended in early 1985 after the debut of Ferrari’s 412. However, the 400i was another commercial success for Ferrari, with 427 GTs and 886 automatics built over six years.

The 365 GT4, 400, and 412 Ferraris are all 18 to 34 years old and have been at the bottom of the Ferrari V12 2+2 food chain for decades. The electric buttons that open the hood, trunk, and gas door fail regularly. Given the car’s low ride height, speed bumps can flatten the exhaust. If you notice an oil mist on your windshield, it means the front oil cooler is cracked and you will soon run out of oil, and the list goes on…. As for long term appreciation or building “sweat equity” by slowly restoring one, I can assure you that Ferrari mechanics, parts suppliers and restoration shops do not discriminate; all parts and labor are equally expensive, regardless of the market value of your Ferrari.

I’ve owned and driven every model in this market summary and have to opine that my favorite is the 365 GT4 or 400 GT 5-speed, as these are seriously fast cars, with a great exhaust sound and amenities like power windows, power steering, and a/c that work adequately. In the mid-1970s I was able to make a high-speed run from Phoenix to Newport Beach in only five hours, running at a steady 125 across the desert in my 365 GT4, a feat that would certainly guarantee a trip to jail today. I’m glad I’ve lived at a time these cars could be used as Ferrari intended.

All of the above were great cars when they left the factory, and if you find a properly restored one, they are still great cars and decent buys today. But be forewarned that buying a car with needs, or a project car, will create a situation that tries your patience, empties your bank account, and makes you regret you ever went down this path. Buy smart, spend more up front, be happy.