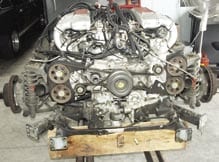 Maintenance has always been a large part of owning a Ferrari; if you are mechanically inclined, consider an older car you can work on yourself. Either that, or seriously research some of the service requirements on newer cars—timing belts for example. When do they really need replacing?

Let’s consider the advantages of knuckle-bashing first. Back in 1972, I bought my first Ferrari, a 1959 250 Pinin Farina coupe, S/N 1447 GT, for the then-market-price of $2,000. My inspiration was endless reading of Road & Track magazine, based only a dozen miles down the road in Newport Beach, and Ferrari, the Sports & GT Cars, by Dick Merritt, then the only current book on Ferraris.

The very few Ferrari owners I knew or met were “gearheads,” diehard enthusiasts who bought Ferraris because they represented the pinnacle of automotive engineering and complexity. Inspired by enthusiasm and necessity, I sourced oil filters, learned how to change twelve plugs, check the cam timing, adjust the valves, and the other intricacies of Ferrari ownership.

It was a simpler time; gas was 30 cents a gallon and the small cloud that followed me was resolved by buying Castrol oil by the case. To this day I do not know if the heater or wipers worked, because I never drove it on a cold or rainy day. I do know that my first Ferrari made glorious sounds, defined my automotive addiction, and never left me stranded.

DAILY DRIVERS, TECHNICIAN’S NIGHTMARE
In the mid-late 1970s, the Ferrari market and the profile of the Ferrari buyer changed forever with the introduction of the 308 and a flood of gray-market 512 BBs. Ferraris now had a/c and power windows that worked, and they could be driven every day. Independent shops sprang up to maintain the new cars. Owner’ manuals improved and detailed shop manuals were available. But the factory-installed smog equipment on the 308s and gray-market systems on the 512 BBs became a technician’s nightmare.

Through the 1980s and into the 1990s, the smog and a/c systems on the Mondial and 400 series resulted in overworked and overly complicated electrical systems, fuse boxes, ECUs, and alternators. The Mondial, 348 and 355, and the Boxer and Testarossa required an engine-out service, and service costs spiraled.

Ferraris became much more complex, with semi-active suspensions, power steering, climate control, power seats, and integrated engine management systems. The 348 evolved into the 355, horsepower jumped from 300 to 370, the redline went from 7,500 to 8,500, and headers began to burn through because of the high temperatures of emission-clean engines. A whole new world of bad valve seats and guides and burnt valves emerged as Ferrari tried to squeeze more power out of less fuel.

BELT INSPECTION AT 52,500 MILES
Engines had changed to cam belts from chains, and belt replacement became a regular part of servicing. But through the 1990s, Ferrari never had an official policy mandating cam belt replacement. Indeed, the factory warranty book for the 355 recommended a cam belt inspection at 52,500 miles. The reality is that cam belts virtually never break. And even if one loses a single tooth, because the cam sprockets are multi-toothed, the loss of a single or even several separate teeth on the same belt would not cause the cam timing to slip.

In 2002, Ferrari instituted the “certified pre-owned program”. To be “certified” a Ferrari had to have cam belts replaced within two and a half years or less. While the 355/360/456 and 550 did not have cam belt problems, they did have tensioner problems, and the early 360 had cam variator problems. Ferrari found the most efficient way to have the tensioners and variators checked was to insist on a mandatory three-year belt replacement. The good news was that the 360, 456, 550, and 575 could be serviced with the engine in, and so costs were not as crippling.

NOT YOUR DAUGHTER’S TOYOTA
While your daughter’s Toyota may go 100,000 miles on a cam belt, a Toyota doesn’t put out over 400 hp, doesn’t rev to 7,500 rpm, and doesn’t have radical cam timing and stiff valve springs. Under these circumstances, cam belts can wear and stretch, not to mention the onset of leaking seals and worn-out tensioners.

So did Ferrari build cars with cam belts from 1974 to 2002—some 28 years—and then suddenly decide belts need to be replaced every three years? Fellow SCM writer Steve Ahlgrim of T. Rutlands, the Atlanta Ferrari experts, interviewed a Gates belt engineer who said Gates recommended changing belts every nine years.

Today’s obsessive-compulsive mandate that cam belts need to be replaced on the twelfth month of the fifth year is simply silly. For example we bought and sold 1983 512 BB S/N 35411 in November, with 30,000 miles and it had never had cam belts changed. When the cam belts were finally replaced after 25 years and 30,000 miles, they showed no unusual wear or deterioration.

Here’s the bottom line on belt replacement. You’ve got the following choices.

Every nine years, as Gates recommends.
Every 52,500 miles, as Ferrari used to recommend for the 355 and earlier cars.
Every five years, as is the common recommendation today.
Every three years, as Ferrari has now decided needs to be done for a car to be “certified.”
Every three months, if you want to keep your mechanic busy.
Personally, I get by with an annual visual inspection of the cam belt and tensioners, and with a replacement every five to nine years, unless my car spends time at the track.

ELECTRICAL ENGINEER OR MECHANIC?
Long-term problems with newer Ferraris will have more to do with obsolete electrical parts than mechanical ones. Parts for the Testarossa and 348 are quickly becoming unobtainium, and it’s a matter of time before Ferrari stops supplying parts for the 355 and 456/550 series. Specialists like T. Rutlands scour the world looking for rare parts like ECUs and discontinued light assemblies.

There is now a whole new cottage industry of high-tech computer-literate propeller-heads who patiently disassemble and rebuild discontinued relay and fuse boxes, ECUs, a/c and heater controls. Today, an electrical background is as important as a mechanical one to maintain a modern Ferrari.

And every time the owner of a modern Ferrari takes his steed in for work, the mechanic can be counted on to point out other problems. Because of the litigious nature of a society that breeds more lawyers than engineers, a detailed inspection by any auto dealer, be he Ford or Ferrari, is an industry obligation. Having thicker wallets, most Ferrari owners want to be advised of impending issues, because bringing the car back is a bigger annoyance than paying more now.

OLDER IS EASIER
We sell many classic era (Daytona and earlier) Ferraris, and the ownership expectations and personality profiles are very different from new car buyers. A 275 buyer is at peace with some exhaust smoke, less than stellar compression, minor oil leaks, older paint, or heater controls that don’t work, as these will be resolved “when they get around to it.” The 275 will be a third or fourth car, and if the owner has to wait for parts, so be it. Plugs for his neighbor’s 456/575 may be $22, but the 275 owner can buy them at Pep Boys for $3 each and install them himself.

If you want to enjoy a Ferrari with today’s state-of-the-art technologies and performance—one with power steering, great brakes, effective a/c, modern safety features, and readily available parts—you have to accept the vastly greater costs to maintain it.