So Many Ferraris, So Many Auctions 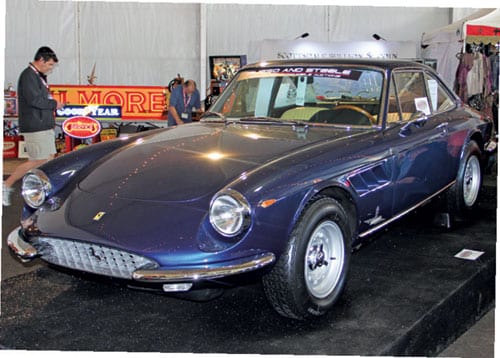 So Many Ferraris, So Many Auctions

It doesn’t get any better than this year’s Scottsdale auctions for car collectors wanting to steal a week of summer in January while bidding on Ferraris.

Collectors spent $184m to buy 2,183 cars during the annual auctionfest in and around Scottsdale. This year’s total easily beat last year’s $159m — and also beat the all-time high of $167m back in the boom days of 2007. Ferrari enthusiasts had to dedicate their time to only two auctions, with the hard-core aficionados bouncing back and forth between Gooding and RM.

Collector cars are hard assets that can be easily transported and instantly converted into other currencies and whose values should beat the specter of looming inflation (or the possibility of further deflation). American (and Canadian) buyers are not hesitant to step up to buy the right car.

While cars are not as liquid as stocks or bonds, the right car has far greater visual appeal, bragging rights and pride of ownership. As my generation, the Baby Boomers, rides into the sunset of our years, there is no lack of buyers or sellers looking for one more great ride.

Muscle cars and American iron
Barrett-Jackson sold a stunning 1,288 cars for a total of $92m, but with a very different business model than RM, Gooding or Bonhams. The usual endless stream of muscle cars, clones and customs was supplemented with a “Salon Offering Collection” of high-end cars that brought seven sales at over $1m. With only six low-end Ferraris on offer at Barrett-Jackson, the Ferrari aficionado was there for the show and not for the cars.

The 1952 Pininfarina-bodied 342 America, s/n 0246AL, sold for $633k, which is a bargain price for those who want a ticket to the lawn at Pebble Beach. Just add $500k — or more — and a few years — or more — in the restoration shop of your choice. In any case, Ferrari led the way for RM’s Arizona auction this year.

Speed, emotion, egos and bankrolls
In the auction world, rapid-fire bidding and the adrenalin rush of a short time to decide whether to bid introduces a rush of drama and emotion into the equation, and it can be very volatile. If several well-heeled Type-A buyers want the same car, at the same place, on the same day, big egos and big bank accounts can result in some very high prices. There was obviously no lack of big bank accounts or big egos at Scottsdale this year. At the same time, the crowd is usually limited to a few thousand people at any given time, so if no one really wants to take a certain car home on that day, the bidding and final sale can be well back of market.

Avoid the snow, come for the show
The Arizona auctions offer the seller a getaway location, a great show and the chance to get an over-the-full-market price at auction.

While most of the cars at auction sell at market prices, sellers go in the hope that they might get that elusive, over-the-market price, as did the 330 GTC at Russo and Steele. On the other hand, they might offer the wrong car on the wrong day and get a back-of-market sale, as did the 1952 Pininfarina-bodied 342 America, s/n 0246AL, which changed hands at a bargain price.

Next January, escape the snow, make the pilgrimage to Scottsdale, mingle with the masses, enjoy the show