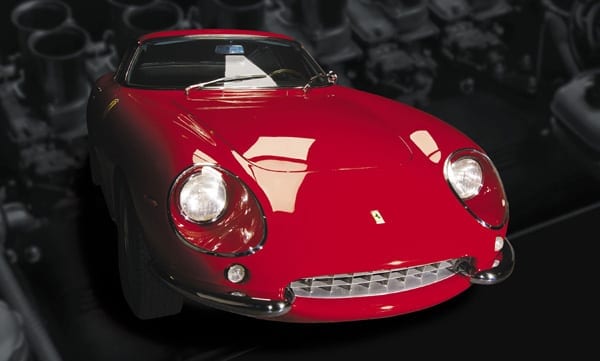 Last year it was Lussos that were in the Prancing Horse flavor-of-the-month club. Their values languished in the “why-would-you-want-one-of-those” $125,000–$150,000 range. Today, there are folks standing in line to buy great ones at $250,000 plus, and cars with period race history have cracked the $400,000 barrier.

But before we talk prices, a short history lesson. These cars are properly called just 275 GTBs. That makes sense, because when they were built, there were no longnose or four-cam models being produced. It’s just like with Jaguar E-types: The pre-1968 cars were never called “first series,” not until the second series was introduced.

The 275 GTB/2 shortnose entered series production in 1964 with S/N 6003. It was Ferrari’s first attempt at incorporating four-wheel independent suspension and a rear-mounted transaxle into a production car. It was also one of the final cars built by Ferrari that made a real attempt at being a true dual-purpose car, as capable of winning races as cruising down to St. Tropez in the summer.

The 275 was and continues to be visually breathtaking. In addition to its classic and sensual body lines, it offered more-than-adequate performance, nimble handling, and the sounds of a screaming V12 rated at 280 hp (but actually producing about 260). But cockpit comfort and ventilation, rustproofing and the driver’s rear vision were not high on the design committee’s agenda.

Add in brakes that were described, in period, as “adequate” and a sexy squared-off nose that caused aerodynamic front-end lift and vague steering over 100 mph, and the end result was high-speed driving that was exciting and kept a driver busy, to say the least.

The 275 also had a solid-mounted driveshaft, with no U-joints, but instead a center-mounted bearing that required the crankshaft centerline, the driveshaft, the center support bearing, and the gearbox input shaft to be in perfect alignment or your teeth would be vibrated loose.

These user-cruel features, all well known to Ferrari cognoscenti, combined to put the 275 GTB shortnose at the bottom of the 275 GTB food chain. A total of 246 were built, with S/N 7827 as the last shortnose.

The only major update during shortnose production, beginning with S/N 7315, was the decision to make the firewall, the entire floor, and the rear bulkhead in fiberglass, which helped to prevent the rust problems endemic to the earlier cars.

The 275 GTB longnose entered production in early–mid 1966, starting with S/Ns in the 7800 range. Its longer, lower front-end shape cured the aerodynamic lift problems, and a new driveshaft with constant-velocity joints solved the driveshaft vibration. A larger back window improved rear visibility, and dual side-mounted fuel tanks allowed the spare to be lowered, which coupled with external trunk hinges, provided more trunk room.

In mid-1966, at S/N 8305, the “interim” driveshaft was replaced with a torque tube between the engine and gearbox, eliminating all driveshaft vibrations. About the same period, the brake system was updated with a much-improved master cylinder and power booster, improving the braking from “adequate” to “acceptable.” About 108 of the 275 GTB longnoses were delivered with torque tubes.

The final iteration was the four-cam. Beginning with the prototype, S/N 8769, the new-and-improved 275 GTB/4 featured a dry-sump engine, with six dual-throat Webers standard (they were optional on some earlier models). Breathing and performance from the four-cam heads was much improved, with 300 claimed horsepower. Production ended with S/N 11069 for a total of 330 cars.

There are two factors at work here. The first, although surprisingly not the most important, is the continuing devaluation of the American dollar against the euro. Cars with asking prices in cheap American “pesos” are simply 30 to 40 percent less expensive to a German, Swiss, English or French buyer than they were 18 months ago.

Second, and most important, is the continued rise in interest in events such as the Tour Auto, the Modena Cento Ore and the Tour d’Espagna. The cut-off date to be eligible for an overall win is generally 1965 or 1966, the final build years of the 275 GTB/2, although later cars can enter. European collectors are known for being less risk-adverse than their often-timid American counterparts, and these “balls-out” events give them a chance to run their cars hard on hillclimbs and race tracks.

But as the numbers of applications continue to climb, event organizers look for cars that are increasingly exotic. They could easily fill their entire fields with 1965 Porsche 911S’s, but instead try to have as many rare high-performance cars as possible. Hence the appeal of the 275/GTB2, as it was built in the right period, has a great look, and, of course, is a vintage V12 Ferrari.

Is it too late to get a great buy on a 275 GTB/2? If you mean in relation to last year’s prices, yes. But Ferrari isn’t building any more, and the number of rich guys who want to play hard with their toys continues to increase. Assuming the global economy continues to march along, there is no reason to expect that prices won’t continue to rise to the tune of 10 to 15 percent per year.

If you’re in the game for the long haul, I believe this is a model that hasn’t yet hit the redline on its value curve.