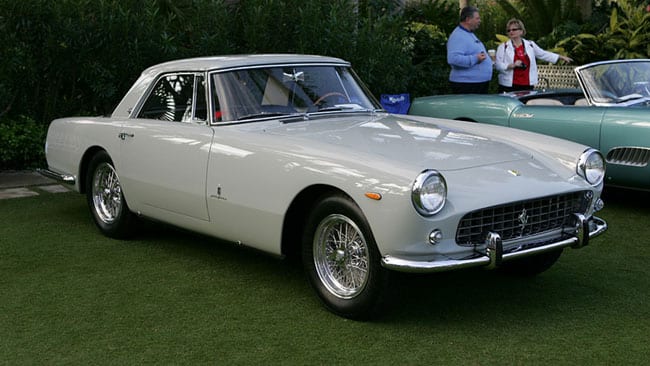 It was a different era
I bought my first Ferrari, 250 PF Coupe s/n 1447, in 1972, for $2,000. It was then a 13-year-old used Italian exotic, with all of the deferred maintenance and complexities that implies. While $2,000 may seem ludicrous cheap today, the median annual American income at the time was app $8,500 and so the $2,000 purchase price represented roughly 25% of the average American Family’s annual income. As a 23-year old body shop owner, in his second year in business, the path to Ferrari ownership was simple: work twelve to fourteen hours a day, seven days a week, sleep at your shop and save every dime you earned. A dedicated and determined middle-class earner could own their first Ferrari.

Had I been able to move further up the Ferrari financial food chain, I could have stepped up to a new 246 GT, Ferrari’s first US compliant entry level V6, at $13,700, (or $300 more for a GTS), which represented almost two years median income. As for Ferrari’s front-engined V12 supercar, the 365 GTB/4 Daytona, its list price of $20,775 would absorb two-and-a-half years income, making a new Ferrari the stuff of dreams.

Flash forward to 2001 when the very same 250 PF Coupe sold to an enthusiast in Maine for $125,000. A bargain by today’s standards, but the median American income had climbed to only $42,000 a year, valuing 250 PF Coupe s/n 1447 GT at three years of annual average income. The price point had moved far beyond the middle class into the top 5% of income earners, which then approached $150,000. A dedicated and determined doctor, lawyer or small business owner could still own what had become an entry-level collectable Ferrari.

Collectables as an investment class
In 2007 s/n 1447 again changed hands, going to a collector in Kentucky for $250,000 at a time when the median income had climbed to $50,000 and the top 5% entry point had just crossed $150,000. With a price-point at five years of middle-class income or one-and-a-half years income of the top 5%, s/n 1447 had become an impossible and frivolous luxury for any but the top 5% – 1% of US income earners, moving from a plaything of the hard-core enthusiast to an investment class asset. The purchase price was no longer a function of annual income but instead part of an investment portfolio of business ownership, stocks, bonds, real estate and collectibles built up over decades.

For those who preferred Ferrari’s latest entry-level spider, and weren’t bothered by the new-car depreciation, a then-new F430 would lighten their wallets by $215,000, or just over four years median income, while Ferrari’s then-new flagship, the 599 GTB, would list at about $325,000. When introduced in 2007 most 599s sold for $100k or more over sticker, so equal to almost nine years median income.

As per the latest Federal Reserve figures, a $500,000 annual income alone is not enough to be in the top 1%. One must also have invested well in their business, plus stocks, bonds, real estate or collectibles, and have an entry-level net worth of about $7,000,000, making our 250 PF Coupe just under 10% of their total assets.

Today, an entry level collectable Ferrari, which, in theory, will appreciate, has now far surpassed the price of the latest-greatest new production Ferraris, which only depreciate. With a new 488 Coupe priced in the $325,000 range and a new F12 priced in the $375,000 range, all are now Veblen or positional goods, such as Patek-Phillipe moonphase watches or 5-carat diamonds, desirable because they are outrageously expensive and hence exclusive.

From the 1% to the .01% and beyond
So much for the rough analysis of 250 PF Coupe price points over four decades. But what about those who have just bought a LaFerrari at $3.7m, to park next to their $1.8m FXX which is parked next to their $2m F50, and the list goes on. This, of course, assumes an equally palatial house and garage for the collection. In 2015 the IRS offered an analysis of the top .01 percent, which, for academic purposes, starts at an annual income of a mere $2.3m but with an average annual adjusted gross income of $12m a year. If you’ve just added a LaFerrari to your growing collection, you are almost certainly in the top .01% and perhaps the .001%.

As for the top .001%, whew, we’re now in truly rarefied air with a mere 1,361 American households in the top .001% bracket, each with an average annual income in the $60m range. In this miniscule group, one can keep a LaFerrari and its many stablemates in any-and-all of their houses.

If we go back to the ‘70s or even the ‘80s, the majority of Ferrari-class wealth was either “earned wealth” or an inheritance. Doctors, lawyers, managers and even the occasional hard working body shop owner with a dream and discipline could own an entry level Ferrari. In the internet-of-everything age we’re in, there exists a new world of mind-boggling “created wealth” from “concepts” such as Google, Facebook, Snapchat et al.

As the figures above illustrate, the higher the price (of anything) the smaller the pool of potential buyers and, as the baby-boomers, the group that coveted the 60s and 70s Ferraris, leave the market, the pool only gets smaller. What is exotic to one generation is merely old fashioned or obsolete to the next. While I couldn’t wait to adjust 24 valves and four sets of points on s/n 1447, that generation and that era are a distant memory. While Baby Boomers like me might have been thrilled to own a 250 PF Coupe, my children don’t care and my children’s children will care even less. Modern cars are simply expected to work, and so today’s buyers would much rather have an F430, a 575 or a 599, all of which are reliable, offer staggering performance and can easily be leased or financed thanks to easy money! And if a 250 PF Coupe seems to be a niche in the Enzo-era cars, consider that none of the more mainstream Daytonas offered at Bonham’s, Gooding or RM in Scottsdale earlier this year sold, and all were the more desirable plexi-covered headlight cars.

Today’s younger buyers want the cars they dreamt of in college, not their father’s, and certainly not their grandfather’s, dreams. As for comparable values, today’s buyer of a 13 year-old Ferrari is buying a late 360 spyder at something well-under $100k or a 575 in the $135,000 range. Both are infinitely more user-friendly and price friendly than a 250 PF Coupe. Better yet, today’s buyer can have both an F430 and a 575M and keep $435,000 in the bank rather than a 60s Ferrari such as s/n 1447. While it’s an interesting academic exercise to crunch the numbers and compare income averages, in the 1960s and 70s Ferraris weren’t collectable, but instead the playthings of hard-core car geeks. In a world of 20 something billionaires that can’t drive a stick shift, and don’t have a clue what a 250 PF Coupe is, far more than the price points have changed.