The Brave New World of Ferraris in China 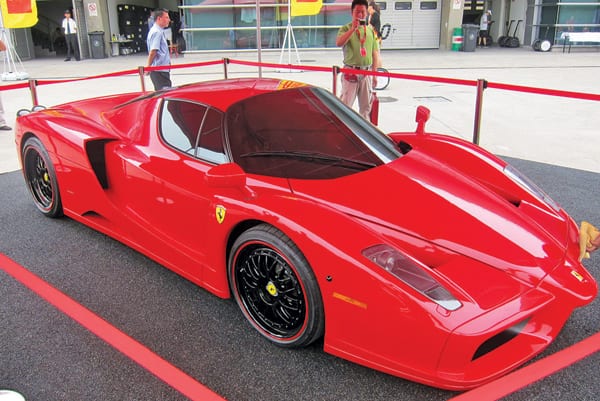 The Brave New World of Ferraris in China

Every few days, I’m asked (or told) about the many Enzo-era cars going to China — or asked what are the best Enzo-era Ferraris to buy and hold in anticipation of the Chinese bidding the market up to the madness last seen when the Japanese started buying in 1986.

The reality is that very few Enzo-Era Ferraris have gone to China, and it will be a long wait before they go in volume — if ever.

A little history
China’s long road to economic reform began in 1972 with Richard Nixon’s unexpected trip to China, which opened diplomatic relationships. In December of 1978, Deng Xiaoping de-collectivized agriculture, opened China to foreign investment and allowed rural entrepreneurs to start businesses. A decade later, Deng began to dismantle or privatize massive state industries, and eliminated price controls and multiple layers of regulations. Deng is often quoted as saying “To get rich is glorious.” Well-connected communist cadres used their power and positions to do exactly that.

China slowly opened to outside movies, music and culture. Jeep was the first foreign automaker to build an assembly plant in China, in 1983, followed by Volkswagen and Peugeot in 1984. By 2006, China had passed Japan as the planet’s second-largest vehicle market, and in 2009 passed the United States as the largest car market on the planet.

Humble beginnings
In 1993, Italian Motors, the Ferrari dealer in neighboring Hong Kong, sent a 348 ts to the Beijing International Conference Center in support of Beijing’s 2000 Olympic aspirations. This first Ferrari was sold to Li Xiaohua, one of China’s very early self-made millionaires. It was an instant status symbol, complete with a Beijing “A00001” license plate. Visiting dignitaries all wanted to meet Li Xiaohua, including Presidents Bush (father and son) and Clinton, British Prime Minister Margaret Thatcher, Russian leader Vladimir Putin and more. All signed his 348 ts, making Li Xiaohua an instant celebrity in China and the voice of the new class of Chinese entrepreneurs.

From 1993 to 2004, Italian Motors, the Ferrari dealer in Hong Kong, was the importer until being replaced by a joint venture by Ferrari and a Chinese partner. In 2006, Ferrari formed an Asian-Pacific office, which grew into the combined Ferrari distributorship for China, Hong Kong and Taiwan. Today, China has 20 dealers from Shenzhen adjacent to Hong Kong to Guangzhou in the southwest to Kunming in the southeast to Ordos in Inner Mongolia and as far as Harbin in the far north — above North Korea. Each offers sales, service and parts. The Greater China distributor claimed sales of 777 new Ferraris in 2011. The used Ferrari market consists of a few out-of-vogue 360s and F430s.

Ferrari cranks up the PR machine
Ferrari expanded their public presence with the “Ferrari 15,000 Red Miles” tour of China in a pair of 612 Scagliettis driven from Shanghai to Mongolia, down to Lhasa in Tibet, across the Gobi desert and back to Shanghai. A pair of Fiats with factory mechanics and two parts-packed Iveco trucks followed to ensure that both 612s completed the journey. Next up was the launch of the 599 GTO at the 2012 Beijing Auto show. In May 2012, Ferrari opened its second museum, “The Ferrari Myth,” in the Italian Centre at the Shanghai Expo Park in China.

As per Ferrari, the new museum “was opened by Ferrari vice chairman and son of founder Enzo Ferrari, Piero Ferrari… and will be continually updated throughout its three-year run to document the evolution of the company and its products. The aim is to introduce the Chinese people to Ferrari, allowing them to experience firsthand the history, cars, technologies and passion of the iconic Italian marque.”

The new museum showcases “a 348 ts, the first Ferrari to enter the Chinese mainland market, a 275 GTB/4, a 365 GTB/4 Daytona, a 750 Monza sports prototype, and Ferrari’s first 4-seater four-wheel drive — the Ferrari FF.”

No used cars
China closed the door to used imports in 2010, but the Chinese culture does a better job of keeping them out. To quote a Chinese client, “You won’t see many old cars in China; people in China generally don’t like used cars, the same as they don’t like to buy used houses.”

“Car collecting is not a culture to be found in China for the time being. Old cars are not their cup of tea,” he said. “When it comes to car culture, China was in turmoil most of the time since the first car was born 120 years ago, so car culture started only in the late 1980s.”

The rich and the truly rich
The very rich in China all have chauffeurs, as most cannot drive. Status is found sitting in the back seat, and to drive one’s own car would be to lose status. Culturally, only truck and bus drivers are trained to drive a stick shift.

Ferrari and other supercars only really started to sell well with the introduction of the F1 shifters. Many super-rich buy Ferraris and other exotics as presents for young wives, so China has the highest percentage of female Ferrari owners in the world market. The sons and grandsons and young wives of the very rich have never learned to drive a manual box, and they prefer F1 shifting to deal with China’s traffic congestion.

Although China is a member of the World Trade Organization, the numbers don’t really add up. For example, a new 458 Spider lists for about $257k in the U.S. — plus a $2,600 gas-guzzler tax and a sales tax and registration of about 10%, so the total price is about $290k. The same 458 Spider is about $750k in China because of compounded import and registration taxes on cars over three liters displacement.

500 exotics at a supercar festival
In the past few years, a cult of both Ferrari and supercar gatherings at the Shanghai racetrack has developed, with as many as 300 new Ferraris or 500 supercars of all makes at each gathering.

Alas, wallet size and ego often exceed talent on the race track. High-speed “Cannonball-type” tours that run from city to city on China’s little-used toll freeways have also come into vogue for the super-rich. Only the latest supercars make the run, as any older Ferraris would be left in the dust. While there are a handful of Enzo-era Ferraris and three late model F1 cars in China, they are truly the exception.