The (Ever Increasing) Sum of Its Parts 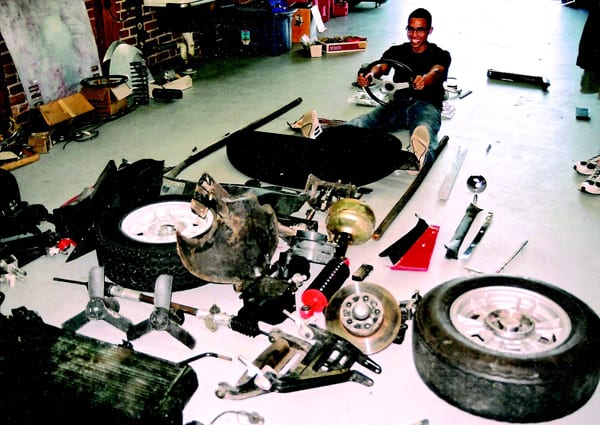 The (Ever Increasing) Sum of Its Parts

Thanks to feedback from readers, virtually every column inspires a follow-up column. In “Opening Pandora’s Black Box” (December, p. 48), I wrote that “the older Ferraris, from the 512 BB backwards, can be restored by an experienced shop, and virtually any part is or will continue to be available or can be made.” What I left out is the difficulty of finding and the cost of sourcing or making those parts.

Parts procurement comes in two levels of complication. Service work, such as an engine rebuild, is a logistical nightmare, as hundreds of parts—24 sets of valves, guides, valves seats, valve adjusters, etc.—are involved. A complete restoration moves the parts nightmare into an all new dimension of misery, as thousands of unobtanium parts must be found or made and then fitted, tested, and approved.

In a conversation with Wayne Obry of Motion Products, I asked which older-car parts were a problem. His answer: “Name a part.” Rubber extrusions? Switches? Gauges? Fasteners? Wheel bearings? Transmission gears? Suspension forgings? The list went on and on…

Obry pointed out that there are also levels of parts problems within restorations. Is “good enough” good enough, or do you want to be absolutely correct to period? For example, if you want your 330 GTS to have period-looking tires, Coker Tire will sell you a set of Michelin XWX VR-70 14s for $1,800 or so. Want to be period correct and show your 330 GTS at Cavallino, Concorso Italiano, or the FCA Nationals? Then get out your wallet and sign up with one of the parts specialists who will spend many hours, or days, or even weeks going through his contact lists to find the correct non-70 series WXW VR 14s. Expect to spend at least $1,000 a tire to find any of the dwindling number of N.O.S. tires still surviving or, more likely, a set of good used tires.

Need a correct ANSA exhaust system for your 330- or 365-series Ferrari? Sorry, they do not exist, but a top quality shop will bend up the pipes, make and build up and assemble the muffler baffles and cans, weld on the attachment points, custom fit the whole assembly, and then wrinkle-finish the final product. A massive amount of time and talent are needed, but the finished system will fit your Ferrari in a way ANSA could only have dreamed of, at a cost in the $10,000-range.

Period glass was bendable, safety glass isn’t
Need a windshield for a 375 America or any other limited-production 1950s or 1960s Ferrari? Expect to pay $15,000-plus to have a one-off made up, and don’t expect it to fit without drama. The period glass was tempered, and had an amazing amount of bendability, while modern windshields are safety glass, and will not bend. If it doesn’t fit, the opening must be redone, at a cost of another $5,000 to $15,000. Need something as simple as a back glass for a 330 GTC (600 built) or a Daytona coupe (1,279 built)? Sorry, they haven’t been available in decades, but Tom Shaughnessy has had them made up, in groups of 15 at a time, and they can be yours for a modest $2,000 each.

As for the rubber seals for these windshields and back glass pieces, the original equipment rubber had a 9-mm deep slot, while the modern replacement has a 7-mm deep mounting slot, with a net result that today glass wants to sit 2 mm higher. But wait, there’s more…. Modern safety glass is slightly thicker than tempered glass, and how much thicker varies from maker to maker, with a net result that fitting Ferrari front or rear glass can quickly become a nightmare. And if it breaks while being fitted, who pays for it? The glass manufacturer, the struggling shop, or the oblivious owner? What do you think?

As for mechanical parts, most of the original equipment manufacturers are long gone, and while current replacement parts may look the same, there is no guarantee that part will fit—or work. Every shop I spoke with had multiple examples of new, remanufactured head gaskets that simply wouldn’t seal because they didn’t have a proper crush ring, or points that broke, or clutches that would not release at high rpm, or water pump seals that didn’t seal because of weak springs; the list went on and on. Adding insult to injury, the very strong euro adds a new level of pain to buying parts that don’t work from Europe.

Each job has a different set of problems
All the shops I spoke with stressed that every major repair job on a pre-Fia-era Ferrari was a study in prototype work. Each job had a different set of problems to resolve, most jobs were non-repeatable, and just because a shop could find the needed parts doesn’t mean they will fit, work, or last. One job might have bad head gaskets, while the next similar job might have soft valves that mushroom, while the next might have valve adjusters that fail. Just name a difficulty.

The net result was that customers often felt they were guinea pigs for parts prototyping. Neither the shop nor the car owner wanted to eat the cost of pulling an engine to replace the offending parts, nor was there a guarantee that a new set of replacement parts from another source would be any better. Adding to the complication are engines that have been rebuilt multiple times over the last three or five decades and have been machined too many times. Cranks sit too high in their blocks, block decks were machined so that liners stood too tall, or cylinder heads were surfaced too many times so their dimensions and sealing surfaces were no longer viable without re-engineering problems.

Modern fuels also brought in a new level of problems by eating up fuel lines, carb gaskets, and accelerator pump and fuel pump diaphragms. Because of environmental costs, something as simple as having the chrome work redone can become astronomically expensive. Chrome work for coachbuilt cars like a 400 Superamerica or 500 Superfast can easily run to $40,000. The simplest parts one could imagine, such as a period 1950s radiator cap, or light switches, or original fasteners—those just don’t exist anymore.

The good news is that many replacement parts have been time tested and work well. For instance, suppliers such as Piet Roelofs in Holland have made up most of the “go-fast” parts for the 250 and 365 GTB/4 series cars. Bill Young at GT Car Parts sells the best head gaskets and much more. Tom Shaughnessy, as mentioned above, has made up windshields, back glass, and other difficult parts. Ted Rutland has sourced a multitude of O.E.M parts and has 1950s–’60s fuel hoses that work. Matt Jones at Re-Originals has had many parts—with an emphasis on interiors—made up, while Geoff Ohland at Parts Source often finds the impossible.

From a personal point of view, I ran a 30-man Ferrari restoration shop for several decades, so I’ve “been there, done that,” and I know all too well that the parts situation has gotten much worse since I left the restoration world. In the past decade I’ve done sales only, searching out elusive and collectible Ferraris for select clients, just like those in the Ferrari parts world seek out elusive parts. Once a car is sold to a new owner, I usually follow the restoration process, and I’m continually amazed at the dedication of those who supply the parts and do the restorations needed to bring these cars back to life.