The Golden Age in America 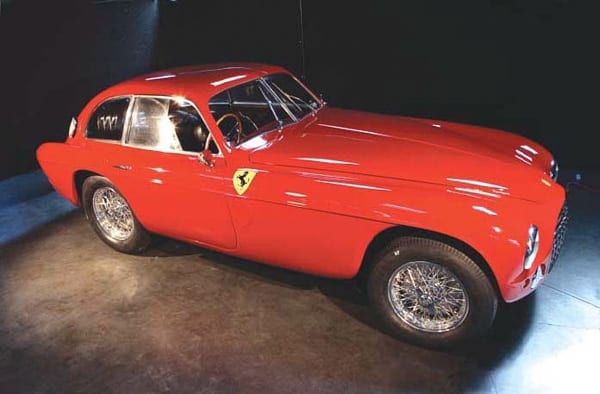 The Golden Age in America

Today’s fuss over “instant collectibles” like the $1.2 million Bugatti Veyron and $400,000 Maybach turns a bright light onto what they don’t have—pedigree and provenance.

It’s a bit like the latest canine fashion, the labrador/poodle mix with the cartoon name—Labradoodle. It’s a nice dog, but expensive at about $1,200, and when was the first time you saw one, a year ago?

Yes, Bugatti won a lot of races in the 1920s and ’30s, but the obscurely named Veyron (after a second-string driver) is an overblown Volkswagen creation, far from Molsheim’s classical minimalism. And the original Maybach was a stodgy Teutonic boulevardier, so maybe it hasn’t changed much, come to think of it.

Which brings us to Ferrari and what sets it apart from these pretenders. Let’s start with the line of racing trophies dating back to its first important win at the 1948 Mille Miglia with Biondetti (and we won’t even mention Enzo’s 27-year career with Alfa Romeo before that).

America was lucky to get a front row seat at the development of the most exciting sports cars ever made. The first Ferraris arrived in the U.S. in 1949, mixing exotic coachwork and aircraft-quality engineering. Like the Jets and Sharks in “West Side Story,” they immediately picked a fight with ambitious Jaguar owners and builders of specials more notable for wicked handling, crude workmanship and raw power. And while these other guys might have won a race or two, the Ferrari drivers got the girls.

THE WEAPON OF CHOICE
Americans quickly embraced the European tradition of using public roads for competitive races and Ferraris made millionaire playboys look good. Check the S/N numbers of the following race cars against SCM auction results in recent years and you’ll see that real pedigree is practically priceless.

Briggs Cunningham (think Proctor & Gamble, bank and railroad money) imported the first Ferrari to America, 166 Spyder Corsa S/N 016, and though he DNF’d at Bridgehampton, he was second at Watkins Glen. Jim Kimberly (Kleenex heir) followed in 1950, bringing 166 Barchetta S/N 0010 M home in fourth place at Bridgehampton, then winning at South Bend and Elkhart Lake. Briggs Cunningham countered the Kimberly 166 Barchetta with 166 Barchetta S/N 0060 M, and the battle was on.

These cars represent the cream of sports racers from the period and often traded paint in the same race. It would be almost 50 years before they gathered again in such numbers at the Monterey Historics to tiptoe around politely, trailing invisible banners that told knowledgeable spectators they were worth between $2 million and $4 million.

But public roads had fatal limitations for racing. The first post-war road course at Watkins Glen, NY, was 6.6 miles of pavement, gravel, and dirt with little run-off room. The 1948 and 1949 races were successful, but Sam Collier was killed in 1950, and when a spectator died in 1952, road racing was in trouble. At Bridgehampton in 1953, a driver died in practice and a C-type Jaguar rolled during the race, injuring several spectators. The race was stopped, and racing on public roads at that venue was over.

On October 26, 1952 the first SAC event was held at Turner Air Force Base in Albany, Georgia before an amazing 60,000 spectators. The next year, the first big race at MacDill AFB in Tampa drew 90,000. Phil Hill and Bill Spear had the race won in Spear’s Ferrari 340 Mexico until a wheel broke, handing victory to John Fitch’s Cunningham C-4R. Hill and Spear finished second and Jim Kimberly and George Huntoon were third in Kimberly’s Ferrari 225.

Meanwhile Jim Kimberly dominated the airport races with 340s S/N 0124 and S/N 0204. The howl of V12 Ferraris on one-mile straights attracted spectators like a magnet to watch three dozen Ferraris in probably the most exciting sports car fields ever assembled.

And the best was still to come. 1954 was Ferrari’s golden year as the new, 4.5-liter V12 375 MMs, with their high-revving overhead-cam engines and 150-mph top speeds blew away the American-powered specials. Briggs Cunningham, Sherwood Johnson and John Fitch initially did well in the Cunninghams but couldn’t beat the 375 Ferraris. Kimberley paid up first, buying 375 MM S/N 0364 AM; followed by Bill Spear with S/N 0382 AM; Masten Gregory with S/N 0370 AM; McAfee with S/N 0362; Shakespeare with S/N 0376; Paravanno with S/N 0478 AM; and eventually even Briggs Cunningham with S/N 0372 AM.

Kimberly scored 14 wins in 15 races in what sounds like an over-the-top Beau Brummell fashionplate (Brummell was a great swordsman, too). Kimberly had a red transporter, red Ferrari, red helmet, red driving suit with button-down collar, red driving gloves, red-suited mechanics and the best-looking car and companions (doubtless in red as well).

Family wealth and social circles splashed Kimberly, Cunningham and others across the media. The cover of the April 26, 1954 issue of Time magazine featured “Briggs Cunningham: Sportsmanship,” while that of the September 27, 1954 issue of Sports Illustrated featured “Gentleman Jim” Kimberly.

SAY GOODBYE TO SAC
It was all too good to be true. An anonymous letter appeared in the Tampa Tribune shortly after the 1954 MacDill season opener, claiming airmen were forced to buy tickets and “volunteer” for race weekend duty.

Errett Power Scrivener, the chairman of the House Subcommittee on Air Force Appropriations, saw a chance to get his name in the paper by holding congressional hearings. No wrongdoing was established, but the SAC races were banned anyway.

The only permanent road race tracks in the country were Thompson in Connecticut, Wilmot Hills in Wisconsin and Willow Springs in California, and these tighter tracks were not kind to the big-bore Ferraris, which consequently became old, used race cars not good for much of anything, and worth little.

So back to pedigree and provenance. There’s a reason these early Ferraris are so sought-after today. They have all the things a wealthy enthusiast is looking for, the equivalent of a G5 for the track. And while showing up in a Veyron surely marks you as a poseur who thinks DuPont Registry is a magazine about collector cars, showing up in a 375 MM brings you instant respect from your peer group—all the guys whose jets are parked next to yours.

For sports cars, there’s only one way to earn a lasting and authentic reputation, and that’s through the trials and tribulations of the race track. Which is really just another way of spelling Ferrari.