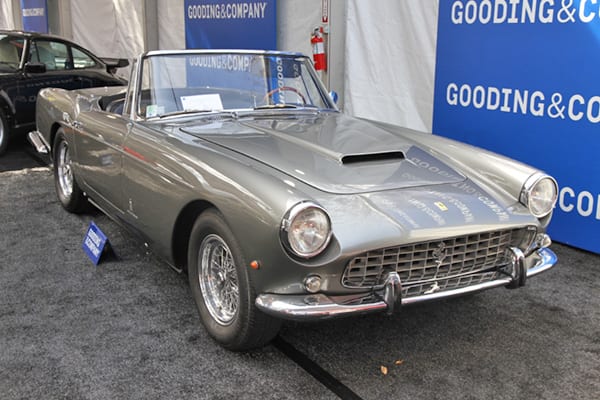 Collectable Ferraris, like all commodities, trade on a world-wide market. That market has doubled and doubled again in only five years, a classical bubble run-up. Although some will disagree, we believe that the market for the Enzo-era Ferraris peaked at Monterey in 2014 and is now off by 25%-30%. After a weak five-year recovery, the global economy is slowing down. Economic headwinds include China’s massive bank debt (at 260% of GDP!!) coupled with a stock market, real estate and construction slowdown. In the US debt is now $19 trillion, debt per person is $58,000 and no-one in either party has a viable plan to cut that debt! Looking to Europe, the looming costs of integrating a million plus refugees who do not speak English, or German, or French, or Danish, or Swedish will be massive. Let’s not forget the threat of a possible “Brexit” or the possibility of an Italian banking implosion (thanks to a 21% non-performing loan rate). And the list goes on.

The numbers tell the story
Still not convinced that these global Dominos have and will affect the Enzo-Era prices? Let’s look at auction house prices, which so many take as gospel. We will use the Series II 250 PF Cabriolets as examples, since they are usually represented at all the major auctions, and exclude cars with mismatched engines or restoration projects from this short summary. At Monterey in 2014 three no-story 250 PF Cabs crossed the block: 250 PF Cab s/n 1817 sold for $2.1m at Gooding’s, s/n 3807 sold for $2.2 at Rick Cole and s/n 2441 sold for $2.25 at Mecum, establishing a base-line in the $2.18m range.

The Baby-Boomers are moving on
I could have used 246 GTs or GTSs or 330 GTCs or almost every other Enzo-era Ferrari. They all show the same trend. As outlined in last month’s article, we’re going through a major generational shift as the baby-boomers leave the collectable market. Those who wanted to own an Enzo-era Ferrari already have. When one gets senior discounts, their priorities turn to business succession, retirement, health issues, kids, grandkids and Mediterranean cruises. Ferraris fall far down the list of priorities. Adding to the global downturn, in the last two years the Euro, the Cdn dollar, the Aussie dollar and the Pound have all dropped against the strong USD. Ferraris are almost always priced in USD so the Europeans, the Brits, the Aussis and Canadians have left the ever-higher Enzo-Era Ferrari price party.

Just as noticeable is the relative lack of buyers. Cars that would have gotten five or more offers two years ago now receive only one or two, and often need price reductions before they sell. The ride had to come to an end at some point, the long-awaited market correction is here.

Moving to the Fiat-era Ferraris, the Boxers followed the same price curve as the Enzo-era cars and peaked in 2014 while the Testarossas, the 308s and 328s flat-lined until they doubled in 2015 in only a year. Alas, they too are now on their way down the price ladder. As for the Montezemolo-era Ferraris, the 550s and 575s, like the 308s and Testarossas, doubled in 2015 and are now on the same price ladder down. The irony is that these newer Ferraris are far better cars than the Enzo-era Ferraris: better built, more reliable, faster, safer, better-handling. If you’re looking to buy a Ferrari to drive, rather than invest in, thanks to the recent price corrections the Fiat-era Ferraris are again becoming buyer-friendly.

And then there’s the exceptions
All markets have exceptions and the ultra-low-production, best-of-the-best Enzo-era Ferraris are still strong, as witnessed by the sale of 335 S s/n 0674 which sold for $35.7M at Artcurial in Paris in Feb. to real estate mogul Brian Ross or the sale of 250 SWB California Spyder s/n 2871 at $17.16m at Gooding’s and 400 SA s/n 3949 SA at RM for $4.4m, both purchased at Amelia Island by Laurence Graff, a London-based diamond billionaire.

Thanks to a new generation of buyers, “collector car” is no longer synonymous with “old car.” The 288s, F40s and F50s are stable in price while the Supercar cars such as the Enzos, 599 SA Apertas, FXXs and LaFerraris just keep climbing. Only last year the LaFerrari listed for $1.4m-$1.5m, but today trade at a staggering $4m.

Where do we go from here?
What comes next? Given the rise of the Gen Xers, who’ve made their millions, or billions, in a business model that didn’t exist twenty years ago, the supercars and modern limited-production models are becoming the new class of blue-chip collectable Ferraris. There were simply too many 308s, 328s, Testarossas, 550s and 575Ms built to support their sudden price spike for long. Since collectability is inversely proportional to numbers built, I’ll speculate that the 550 Barchetta and 575M Superamerica and other such modern marvels as the F512M, Scuderia Spider 16M, 458 Speciale A, and 599 GTO could become the new collectables.

There will always be significant demand for rare and legendary cars like the Cal Spyder, SWB, and GTO, so I will guess that these prices will just keep climbing, but as the baby boomers leave the market it’s hard to see where the past doubling and re-doubling of prices for more common vintage models like the Daytona and Dino 246 will come from. While these cars will always be an important segment of any collection, any future appreciation will probably be far more modest. They were the supercars of their day, but their appeal today is aesthetic, historic and/or nostalgic. A Gen Xer who grew up with the poster of a F40 or an Enzo on his wall isn’t going to be nearly as interested in a 45-year-old car that’s far slower than the BMW SUV he just bought his wife.

To quote the legendary economist J.K. Galbraith, “The only function of economic forecasting is to make astrology look respectable”. Having said that, my crystal ball tends to short circuit from time to time. I’ve been wrong before, I’ll be wrong in the future. However, centuries of economic history always prove that booms always end and busts eventually turn around. In every boom everyone wants to think this time it’s different, the good times will go on forever. Alas, the party always ends.

I’d like to thank the following: Thor Thorsen, Michael Lynch, Howard Cohen, Stephan Markowski, Bruce and Spencer Trenery and Anthony Moody for their help with this article