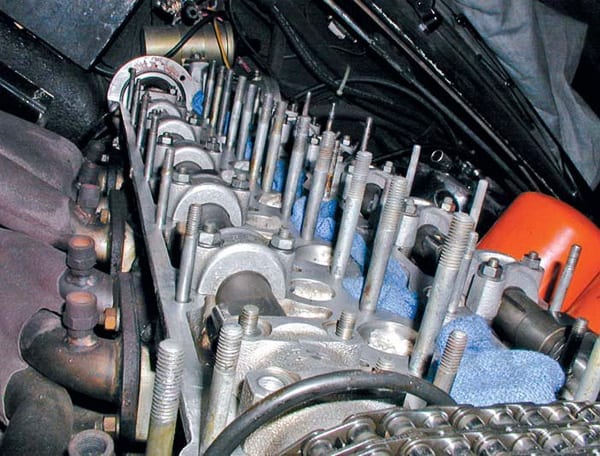 In May of 1985 I purchased an unusually nice 365 GTC/4 S/N 14965, finished in black lacquer with black leather, and resold it immediately to a client in San Francisco. In October of 1985 I re-purchased 365 GTC/4 S/N 14965, then resold it in November to a client in Hawaii. Between these two sales, my service department replaced the clutch, rebuilt the transmission, aligned the suspension, replaced the a/c hoses and adjusted the Webers. Mileage on delivery to Hawaii was 40,055 miles. A great looking, great driving C/4 with no stories.

Over the years I kept in touch with the Hawaiian owner, and on my vacations to Hawaii he offered to let me use the 365 GTC/4 as my driver, as he rarely used the car. While I didn’t take his offer to use the 365 GTC/4 while in Hawaii, a mutual friend did and in late 2000 reported, “It needs a bare-metal repaint, and the a/c went away years ago.” But at the time “it ran fine,” and had only 44,618 miles when he dropped it off, just 4,563 miles more than were on this 365 GTC/4 when I sold it to Hawaii years earlier.

Early this year, the owner offered to sell me his little-used 365 GTC/4. All six carbs were frozen solid in the closed position, and he didn’t want to deal with coordinating the work or the logistics of shipping a non-running car from Hawaii. The affordable shipping rates are all roll-on, roll-off, which presumes a running car. So any work needed would have to be done in Hawaii prior to shipment.

The price was very attractive, but, after decades of writing on the perils and pitfalls of deferred maintenance and having used the 365 GTC/4 and carbureted 400 Ferraris as the poster children for deferred maintenance, I knew all too well the potentially deep money pit I was being offered. Attractive price or not, it screamed caveat emptor, and so some serious forethought was in order.

MR. SMARTY BUILDS A BUDGET
This C/4 was long past time for a full 30,000-mile major service, and a few calls to the best California shops confirmed that the recommended service included rebuilding all six carbs, adjusting the long cam chain and all 24 valves, degreeing the cams, overhauling the distributors and changing all the fluids. Labor estimate times ranged from the Ferrari factory’s very optimistic 32 hours to 46–60 hours by the best California independents.

I’ve got thirty years experience dealing with every possible aspect of older Ferraris and so should have seen virtually every possible complication by now. I had also sold this car twice before and felt I knew it well; it was a “no stories” car and, to quote the last driver, “it ran well.” I didn’t see what could go wrong; the final bill should be under $8,000, so FedEx soon had my check for payment in full.

FROM PRINCESS TO PIG
A few weeks later, I was in Hawaii to buy several other Ferraris and stopped to inspect my recent purchase, throwing open the proverbial Pandora’s money-box. I was shown that the aged fuel inside the six Webers had turned to asphalt, and the inner carburetor bodies, the jets, the floats and every internal part of the carbs had a thick coat of rock hard fuel sediment. The carbs had to be carefully heated to soften the fuel-turned-to-asphalt enough to allow the choke and accelerator pump’s pistons to be pulled free from the quagmire in the carb bodies. Once apart, the asphalt-coated internals were immune to today’s environmentally-friendly but impotent carburetor and parts cleaners. After several days in the carb cleaner, every part had to carefully excavated, layer by layer, with scrappers, taking care to not damage the delicate parts, and then finally cleaned with soft wire brushes and wire probes. A two-hour disassembly and cleaning had become a ten-hour heat-and-scrape exercise followed by a 26-hour wire brush-and-clean job. Say goodbye to a non-budgeted 36 hours at $60 per hour, or $2,160.

But wait, there’s more. The dual aluminum gas tanks each had old fuel that had turned into half an inch of molasses. Each tank had to be cleaned by pouring a few gallons of watery carburetor and parts cleaner into them, sealing the openings, then allowing the solvent to sit for days while occasionally sloshing the cleaner back and forth, then straining the semi-solids from the goop and recycling the cleaner. As for the brass screen fuel filter, it was a throw-away. Non-budgeted time to drain the fossilized fuel and detoxify the fuel tanks and strainer system: 14 hours, or $840.

Once out and apart to be cleaned, the fuel tanks and trunk floor became a while-you’re-at-it-why-don’t-you-paint-it, and so were repainted before reinstallation, adding in another non-budgeted four hours, or $240. Adding to the fuel system nightmares, the ossified fuel had plugged the fuel pumps and the insides of the flexible and metal fuel hoses, so all had to be dissembled and cleaned, adding another 6 hours, or $360.

Most amazing was the 27.5 hours of mind-numbing labor needed to scrape 33 years of carbon from the cam cover gaskets, in slow and careful 1/32″ increments. They were permanently glued to the aluminum heads with the Italian version of hardening Permatex. Making the job more difficult was that the gasket surfaces were well hidden in a forest of cam cover studs, so a wood chisel was used to avoid gouging the aluminum surfaces. Each short and careful stroke of the chisel had to be prefaced by packing paper towels inside the cylinder head to prevent the carbonized gasket fragments from falling into the open engine, and each stoke was taken with a vacuum hose in hand, to suck up the carbonized gasket fragments before they could fall into the engine’s internals.

Just as the fuel had fossilized, the brake fluid had turned to rusty Jell-O and the brake calipers had to be cleaned with the same mind-numbing detail work as the fuel system, so add another non-budgeted $480. This same gelatinous brake fluid also meant the master cylinder had to be rebuilt, another three hours, or $180. Additionally, the brake vacuum pump uses a wire-wrapped rubber suction hose, covered in a cotton based material that had reverted to dust over the years, and so had to be replaced, adding in another non-budgeted $200 in parts and $180 in labor.

The next surprise was extra time needed to cut free fossilized water and heater hoses, scrape the aluminum surfaces of the now-exposed crystallized powder on the aluminum water pipes and overhaul all the frozen heater valves—another non-budgeted bill of eight hours at $60, or $480. Needless to say, the water pump seals were beyond redemption, and so another $500 in parts and labor were quickly added in. Of course, the grease used in the distributor advance mechanism had long ago gone to its maker, so another $480 in cleaning labor was needed. As for the a/c compressor and drier, a mere $600 in parts and labor cured their ailments. Last but not least, the original air injection tubes had simply been crudely folded over and had to be carefully heated to be removed and then properly capped, at another $360. The list of frozen nuts and stripped threads that had to be repaired was part of a voluminous list of other minor one- and two- hour add-ons that went on for pages.

Was there any good news? Yes, the valve assembly was serviced without surprises, the valve adjustments all came within specifications and the cam chain was tensioned without complications. The cams had to be re-degreed, but within the time I had allotted.

Even better, the car itself was solid; the original leather had a nice patina; the body was straight; the decent black paint actually enhanced the 365 GTC/4 fish-mouth; the Borrani wire wheels were serviceable and, oh, happy days, the rising market should make up for my unexpected expenses!

EARTH TO MIKE? HELLO?
Even the experts need the occasional wake-up call—and this was certainly a big one. As an expert, I should have expected the worst, and more. Indeed, the very experienced Hawaiian Ferrari specialist doing the work was surprised that I was surprised. Looking back, if I had a detailed pre-purchase inspection done, my offer would have been less, but my lower offer would not have bought the car. If I wanted the car, the price was the price and I simply had to accept the long list of problems that would unfold.

Had the owner put in fresh gas and circled the island twice a year, few of these problems would exist. The bottom line—I now owned the car and had to live with an extra 200 hours of excavating and exorcising fossilized fluids, frozen parts and deferred maintenance. Even with the friendly Hawaiian price of $60 per hour, the final bill was about $15,000, $7,000 above my budget, and the true price of very long-term deferred maintenance. While every 365 GTC/4 will need this maintenance over its lifetime, I simply hadn’t budgeted to do it all at once.