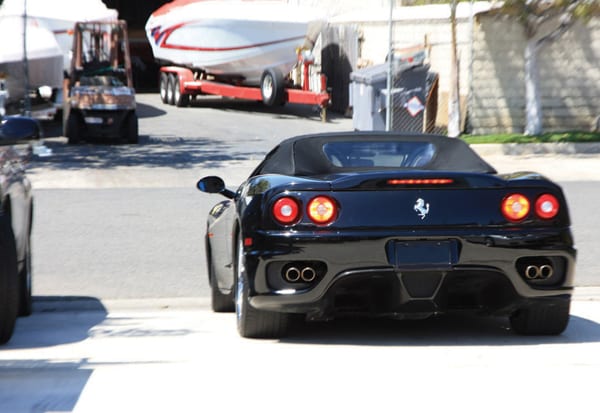 Readers of this column know I’m not a fan of online auctions or dealer auctions because it’s usually impossible to have a detailed, professional pre-purchase inspection of the car. As for prior ownership and service records, they are usually non-existent. While some clients have had good luck buying without inspections, others have not.

Our tale begins with a 2001 black-on-black 360 Spider purchased at a local dealer’s wholesale auction. The 360 was nicely equipped with power Daytona seats, Scuderia shields, chrome wheels, red calipers and had just over 20,000 miles. On arrival, the purchasing dealer realized the 360 had a noise in the bell housing and sent it to a local shop for an inspection. The bolts that hold the clutch cover to the flywheel had started to back out and were attempting to machine their way through the inside of the bell housing.

This potential catastrophe was resolved by a properly fitted new clutch and pressure plate assembly. The throw-out bearing and clutch positioning sensor were also beyond salvage, but $5,000 later those problems were solved. While the car was in the shop the cam belts and cam seals were also replaced at $3,000 for a first-round total of $8,000.

The snowball grows and grows
A month later, the same 360 Spider, still unsold, was back at the same shop with a misfire and hydraulic cam lifter noise, so two lifters were replaced. Amazingly, Ferrari was out of new cam lifters for the 360. So, two new-old stock lifters had to be tracked down at a dealership in Canada. The same lifter was used in both the 355 and 360, so with over 25,000 355s and 360s built, a continued lack of cam lifters could soon be a major problem.

The good news is the shop was able to lift the cylinder head off the engine while the block stayed in the car, pull the oil pan and fit a new piston with new rings and two new exhaust valves into the head. The valves on the other three cylinders of that head were also lapped in.

The bad news is that the cause of the misfire had to be found.

Breaking the codes of this snowball
While plugging in the SD-2 Diagnostic computer should, in theory, find the problem, 360s are fitted with two separate ECUs that treat the V8 engine like two separate 4-cylinder systems. The right side ECU is primary, talking to the complete car and its many systems, while the left side ECU carries the misfire codes. In these esoteric situations, the secret to success is knowing how to decipher the codes and diagnose the problems, and when everything goes wrong, to know which other shops to call to work through the problem.

Given my past experiences, not always positive, as an independent dealer-broker, I was pleasantly surprised to see how the senior mechanics at the local authorized Ferrari dealer and the owner of the local independent shop assisted each other in problem solving.

The shop eventually discovered that the battery had been replaced, and the current sense wire from the positive side of the battery was loose. The current sense wire connects directly to the alternator, and the loose wire caused the electrical feed to be intermittent, causing occasional coil misfire. The coil misfire caused the catalyst to overheat and come apart, which caused the combustion chamber and piston damage.

The fluctuating voltage caused the engine ECUs to send erratic and misleading codes to the Sistema Diagnosi SD 2 scan tool. Further complicating the inter-connected electrical problems is the often-expanding amount of time needed to run a modern car through the key cycles needed to clear the many potential code errors.

Contrary to common belief, the factory scan tool does not tell the user how to repair the car. The tool merely gives technicians a list of options and possibilities that sometimes lead down blind alleys. Clearing codes can take multiple driving cycles for a code error to return, and each driving cycle has to begin with a cold start.

These gremlin searches can consume many hours, and someone has to pay for the shop’s time. Alas, the word count I’m allotted does not allow the time or space for a detailed explanation on electrical gremlin hunting and code clearing in this column. For those brave or bored enough to want to know, the mysteries of code clearing will be the subject of a pedantic future column.

Last—but not least—the car’s owner had the dash face and cover removed and recovered while the engine work was being done. When the dash was reinstalled it was found the speedometer brace had been mounted backwards by the upholstery shop that recovered the dash. The speedo is one of the last parts to be installed, so the dash had to be deconstructed yet again and then refitted.

Once the dash was back in and the mechanical and electric gremlins were repaired or removed, the 360 was road tested. The existing problems were now resolved, and it was delivered back to the independent dealer. The second set of repairs was $12k—for a new total of $20k.

I had just finished this column but had not yet hit the “send” button when I visited the same shop, and the 360 was back! The same 360 had now developed an O2 sensor problem, and while replacing an O2 sensor is a sub-$500 problem, I’m sure the saga of the black 360 Spyder is not yet resolved.

There are several morals to the story.

First, there is usually a reason why some cars are sold at auction—and not to the retail market. Simply put, these are second-level cars some dealers feel are best pawned off as quickly as possible.

Second is the B.D.T.I. (Brain Damage to Income) ratio. When a dealer has to pay an unexpected $20k for repairs on a car they will sell for some number well back of $100k, there is little to no chance of making a profit, and profits are needed for survival.

Third, any repair shop always works more efficiently when it works with other local shops and dealers to share information and solutions on problem solving.

Last, but not least, if you’re in the market: while 360s are now bargains at $75k-plus for no-story coupes and $85k-plus for no-story Spiders, there were 18,000 built. Take your time, do your homework, make sure any car you consider has service and ownership records, get a detailed pre-purchase inspection and buy the best