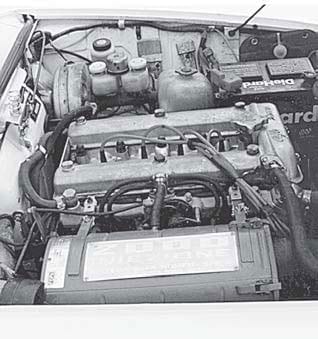 No one is more persistent in his questions about how to have an affordable Ferrari than our editor, who seems to believe it is his destiny to discover the “Northwest Passage” to the land of cheap Ferrari valve jobs.

Here’s today’s plaintive and misguided inquiry: “Cindy’s ’78 Alfa Spider has gone in for a head gasket and valve job and it will probably be around $1,500. Since a four-cylinder Alfa is one-third of a 330 Ferrari V12, and there should be some economies of scale here, shouldn’t a valve job on my 1963 330 America be $4,500?” There are many reasons why our editor is hopelessly adrift in fantasy-land.

First, there is no economy of scale. The Alfa is a smaller, more compact engine, and the overall labor is much less. The single distributor and fuel-injectors on the Alfa can be removed and pushed aside while the head is removed.

The cylinder head is easily accessible from either side and can be removed by a single mechanic. Most shops will quote 12 to 14 hours for the job at a labor rate of $60 per hour or $720 to $840.

Parts, labor and machining for a valve job on Cindy’s 25-year-old Spider should indeed be in the $1,500 range. Since the car is worth, being kind, around $7,500, this investment, which represents about 20% of its value and will make the car much more pleasurable to drive, makes a lot of sense.

With the Ferrari, a car that is 15 years older, the equation disintegrates quickly. Labor will be much higher. The Ferrari’s cylinder head studs are almost always corroded solidly onto the head studs and a one-half-inch thick steel puller plate must be used to apply massive pressure to slowly and evenly pull the cylinder heads off the block. This can’t effectively be done by a single person. Head removal is really best accomplished by taking out the whole engine—in fact, every shop I spoke with explained that in the end it is generally cost effective to pull the engine out of an old V12, even for a valve job. It makes dealing with any other eventualities, and there will be several, much easier.

Before the 330 cylinder heads can be removed, the Weber carbs and linkage, both distributors, the cam covers, the 24 rocker arms and their pedestals all must be removed for access. Assuming the heads come off without difficulty, the head studs don’t have to be removed by a hack saw and the cut-off head studs don’t have to be laser cut from the block, the total time to remove and refit the heads, install the cams, re-time the distributors, remove and install the engine, etc. is 60 hours at $75 per hour, or $4,500.

Machining the new valves, seats and guides is a modest $480, bringing the total for parts and machining for our Ferrari to $5,616. Total parts, labor and machining on our 35-year-old Ferrari is just over $10,000, or more than six times the cost of the Alfa job, even though the engine has only three times as many cylinders.

With an estimated value, being kind again, of $35,000 for ED.’s Ferrari, this valve job is nearing one-third the value of the overall car. That doesn’t sound too bad, but there’s really more to this dismal picture.

With an old engine, the chances are that a valve job, with its resultant increased compression, will simply exacerbate the problems in the lower end of the engine. Rings, pistons and liners really should be replaced, and, in words well-known to anyone with an old car, “while you’re in there,” the bearings should probably be renewed as well. How do you spell $25,000?

Now you’re approaching two-thirds of the value of the car, and begin to understand the ultimate pitfall of doing anything to a 2+2 Ferrari. The cost of a valve job or rebuilding an engine to stock specs on a Daytona, a 330 GTC, or even an SWB won’t be much different than on ED.’s 330. But when a car is worth $1.2m, spending $25,000 is really chump change. For a $35,000 car, it’s the end of the world.

For three years, now, each time ED. comes up with a new scheme, my response is the same. I send him a case of ultra-cheap, straight 40-weight oil (since it’s not going to stay in the engine very long, what’s the point of buying something expensive?) with a label attached that says, “Oil is cheap and motors are expensive.”