Too Many Serial Numbers 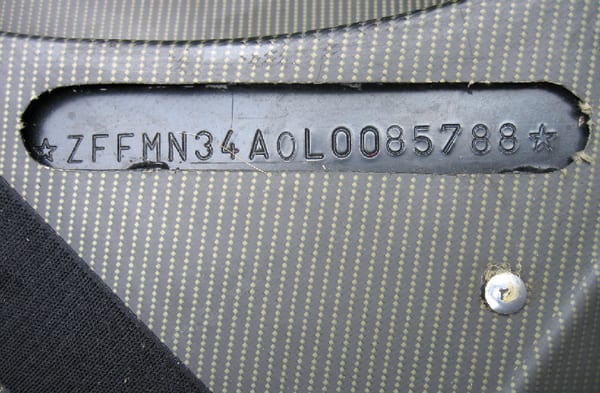 Too Many Serial Numbers

Our story began when a client asked us to market his ultra-low mile, two-owner Ferrari F40, s/n ZFFMN34A0L0085788. With only 499 unusually well-documented miles, a mere two owners over 21 years and an unbroken paper trail from new, the pedigree didn’t get much better.

The owner understood that a great set of photos is essential to marketing and so had his mechanic supply 70 high-resolution photos modeled after what we normally use on our website. The photos were sent to the team who do our hardware, software, website and e-mailers for photo processing.

While they were doing their due diligence, they noticed that the aluminum door plate, the chassis stamping, the steering column and the warranty card all carried the correct VIN of ZFFMN34A0L0085788, but the bar coded VIN (ZFFMN34R2L0085887) on the driver’s door pillar didn’t match.

Crash repair? Stolen parts? The dark-side conclusions a buyer (or a law-enforcement or customs agent) might draw are many. However, with this F40 and the 550 we discuss below, it turns out that it was simply a factory screwup. Read on.

Decoding a Ferrari VIN
The eighth digit in the correct chassis number was an “A” and showed this was a left-hand-drive Ferrari sold new into the North America or Middle East markets. The incorrect BAR-coded VIN carried an “R” which doesn’t match with any of Ferrari’s market codes for the eighth letter in the VIN. Additionally, the ninth digit in the correct chassis number was a “0,” which is a check digit number. The BAR-coded VIN carried a “2,” which is the wrong check digit in the VIN.

All VIN numbers are a standardized code dictated in 1981 by the National Highway Traffic Safety Administration. On all Ferraris built after 1981, the first three numbers (ZFF) are for Italy and Ferrari. Using this F40 as an example, the fourth digit (M) is for the engine type, the fifth (N) for the restraint system, the sixth and seventh (34) show the model type. The eighth digit (A) is for the sales market, the ninth (0) is a check digit and the tenth (L) is for the model year.

For those truly into minutia, the eighth digit—although listed as a market digit—is actually arrived at through a fairly complex calculation, which is why they seemingly vary. It is this way so an unscrupulous individual can’t create a VIN without the formula, which is protected by each manufacturer. The eleventh digit (0) shows the assembly plant location and the twelfth through seventeenth digits (085788) are the actual serial number of the car. While the full Ferrari 17-digit VIN code breakdown takes six pages to fully explain, it’s cast in stone and leaves nothing to chance.

So, what gives with different VIN codes on the same Ferrari?

Déjà vu, all over again
We last faced this same dilemma two years ago when we were asked to market 2000 Ferrari 550 s/n ZFFZR49A3Y0117133. The owner had supplied a great set of detailed photos. The chassis stamping and steering column were correct, but the warranty card was s/n ZFFZS49A8Y0117133 (different restraint system and check digit), the bar coded VIN showed ZFFZR49A3YO117133 (a non-existent assembly plant) and the door plate had the correct VIN, but the build date was stamped SEPTEMBER 1998, which was a full year too early.

An email to the dealer who had sold this 550 new confirmed they had seen the discrepancy but did nothing. The car had been special ordered and the eager new owner wanted his new car “now.”

As a certified anorak, I’m amazed at how often non-matching serial numbers are quietly swept under the table by some sellers. For those who don’t know, in British slang, an anorak is usually a socially inept person—almost always male—with an obsessive compulsive hobby that includes tracking and recording incredibly detailed information on arcane subjects, such as trains, cars, airplanes, or luxury yachts, all of which is normally regarded as more than staggeringly boring by the rest of the population.

I, naturally, charged into the mismatched VIN quagmire in an attempt to solve the problem.

An email to one of the historian groups I belong to brought a response from Andrew Wass, who commented that this 550 was one of the two first 2000 model year 550 Maranellos sent to the United States that year, so the mismatch was probably a very early production screw up. However, the discrepancy should have been spotted at the factory, again when this 550 came through customs and was inspected at Ferrari North America’s facility in New Jersey, and again at the selling dealer during their pre-delivery inspection. It either wasn’t spotted or was just ignored.

Value added by solving the problem
Why do we care about a mismatched number on the door plate or the restraint system? All Ferraris from the 360 and 575 onward have the VIN encoded into the onboard computer, and it can be very problematic when the diagnostic computer tells you WRONG VIN.

Needless to say, mismatched numbers can become a very ugly problem if the car is in an accident and there is an insurance claim, if it is stopped and checked by the police, during a smog or DMV VIN check—or when the car is for sale and it is inspected by a shop or buyer who does more than the usual due diligence.

The thoughtful dealer and brokers who do go through the drama to understand the system—and have the patience and capacity to get the mistakes corrected—add both peace of mind to the owner and value to the sale.

And now the good news
The good news is that Ferrari North America has dealt with these problems before, and they have assigned a rep to this problem. If the rep determines it is necessary, the factory will generate a correct door plate, a new warranty page and a new door plate or BAR code sticker in about 60 days and have it installed at the local dealer. In the case of the wrong computer VIN, the factory will re-flash the dash to make the corrections. There is no charge.

If the owner lives far from an authorized dealer, Ferrari North America will send out a service representative to the owner’s home or to a local independent shop for installation—again at no charge. On those rare occasions when the VIN number is stamped incorrectly into the chassis, the Factory will repair the problem but they require that an authorized dealer do the work.

Avoiding CARFAX and Ferrari Chat
Over the years, I’ve come across multiple Fiat- and Montezemolo-era Ferraris with the same problem— from Mondials to Testarossas to F40s. As for the variations on the same problem in the Enzo-era Ferraris, that could be a short book of examples.

All dealers agreed that avoiding a problem with the police and state departments of motor vehicles was priority one, and keeping any chassis or data plate discrepancy off a CARFAX report or far away from www.FerrariChat.com was equally as important. A CARFAX problem—or one of the many endless threads on FerrariChat—could make a future sale problematic.

It’s much better to solve any problem when it is found. Ferrari is very cooperative, and the expense and drama of a title bond can be avoided if the problem is quickly dealt with through Ferrari North America. While very few owners will ever face this problem, it is always a possibility and (at least to this anorak) a technically interesting problem that screams for solution. It always pays to do your due diligence when checking a Fiat- or Montezemolo-era Ferrari for manufacturer identification discrepancies. Catch them before a routine vehicle stop ends up resulting in a vehicle seizure, which is a sure way to ruin your day.

When buying any Ferrari, take the few minutes to check the VIN numbers and build date info—and if you already own a Ferrari with a problem, take care of it before a uncommon molehill becomes a mountain of red tape.