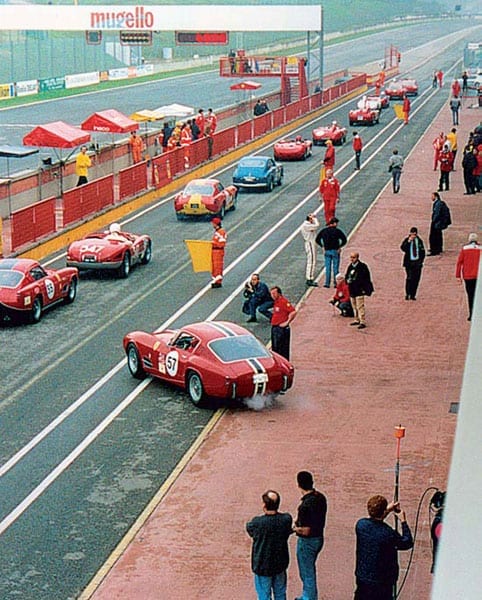 “I’ve always wanted to own a Ferrari.” That’s something I hear every day. It’s usually accompanied with, “I’ve worked hard and my business is doing great. My kids are in college, and I just want to have some fun.”

Okay so far. But then it gets a little more confusing. Some of these Prancing-Horse newbies are determined to only buy a Ferrari that’s a good investment. Others want a daily driver. Some want to have a guaranteed entry in the Mille Miglia. Others want to go on the New England 1000. In one e-mail, I was asked to compare a 360 Spyder, a Daytona, a 288 GTO and a 246 Dino. Well… they all have wheels.

A number that seems to keep cropping up in these requests is $200,000. There seems to be some swagger to saying, “I’ve got 200 large to spend for a toy.” Only a few years ago, this money would buy a Ferrari suitable for vintage rallies, vintage racing or the concours circuit. But rising prices have made your choices more limited today.

What follows is a quick survey of the $200,000 Ferrari market, starting with current production cars.

In the older Ferrari market, only two years ago $200,000 would have given you your pick of 275 GTB short-noses, Lussos, or a pair of not-so-nice Daytonas. However, recent sales have seen short-nose 275s at a stunning $275,000, good Lussos over $200,000 and very nice Daytonas selling quickly for as much as $150,000. Most Ferrari “experts” have always maintained that these cars have been undervalued for a decade—it’s nice to be right once in a while!

Want to go racing? While $200,000 might buy you a non-factory Competition Daytona conversion or a steel-bodied Boano, they are only eligible for the U.S. Historic Challenge, not in Europe. The same amount will get you a great 250 SWB or GTO rebody, but forget the top-flight events. You had better be happy racing in VARA or HSR events where you will have a great seat to watch $30,000 Corvettes pass you by. As for the Mille Miglia, Tour Auto or other European events, $200,000 will no longer get you a car that will be accepted.

Club racing your passion? 360 Challenge cars start at $100,000, 355 Challenge cars at $60,000 and 348 Challenge cars at just $50,000. They are all Cavallino and FCA national meet eligible, and SCCA eligible. This is your chance to be a real Ferrari race driver on the cheap—if you don’t stuff your toy into the tire barriers. Alas, few seem to care about this series here in the U.S. Unlike Europe, where Challenge grids are always chock full, risk-adverse Americans don’t seem eager to flog their cars every weekend, leading to thin fields and consequently low resale values on these cars.

Concours your thing? If you want to be on the lawn at the Greater Syracuse Italian Car Show and Barbecue, your $200,000 will get you a Daytona or a pair of Dinos and a VIP pass. (As an aside, some concours seem to make a point of giving some sort of an award to every Enzo, which I find exceedingly odd—isn’t it a new car?) In any event $200,000 will no longer get you a car eligible for Pebble Beach or the Bagatelle. Time and market have passed you by.

Finally, what about American vintage tours? Well, there’s good news and bad news. The good: There are still a number of Ferraris in this price range that will be acceptable to most of these events. The bad: Given American driving styles and our often-exuberant state troopers, you’re usually better off with a cheaper car that you can flog harder without winding up in jail.

The premier event is the Colorado Grand, where all the big boys show off their pre-1961 cars. While $200,000 will still buy a 250 PF Cabriolet series II or a steel Boano, both acceptable, a Maserati Vignale Spyder will get you in even faster and be as much fun to drive, this at half the price. For the California Mille, with all of its twisty back roads, I suggest an Alfa Giulietta Spyder. Pay $30,000 for a great one and put the rest of your money into a perfect Daytona to use as a support car. For the New England 1000, how about a nice 365 GTC 2+2 for $50,000? You’ll have a better time than the guys in the Barchettas, and have room in the back seat for all of the outfits your significant other will want to wear to all of the tony resorts.

In most automotive circles, $200,000 is still a lot of money. It will buy you a pair of Porsche Cayenne Turbos, three E-Classes and who cares how many Kia Rios. But when it comes to the new or high-end-vintage-event eligible Ferraris, two hundred large is just a starting point.