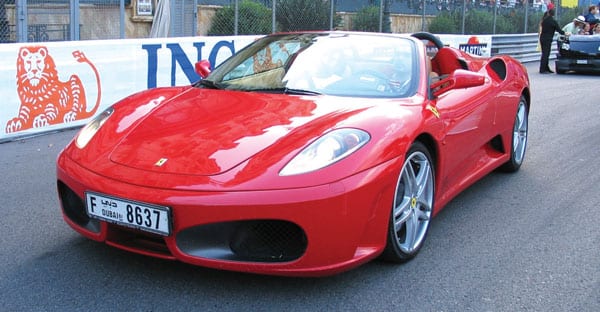 The flow of Ferraris to the U.S. began in October 1948 with Tommy Lee’s purchase of 166 MM Barchetta s/n 0002M at the Turin Auto Show, quickly followed by Briggs Cunningham’s purchase of 166 Spyder Corsa s/n 016 that November. For the next 60 years, Ferraris have gone back and forth between Europe and the U.S., moved by currency swings, economic booms and busts, smog laws, and ever-growing racing events. Over the last few years, there has been a slow but steady movement of cars toward Europe due to a woefully weak dollar and the popularity of events such as the European Ferrari Historic Challenge, the Tour de France, the Tour d’ Espana, ad infinitum.

As Ferrari prices have escalated and the dollar has steadily sunk into the sunset, I’ve had no lack of would-be-sellers who want us to sell their older Ferraris for ever-higher prices overseas to the new and booming emerging markets such as Russia, China, and the Middle East. While I’m the first to agree that sales of new Ferraris to China, Russia, and several of the oil-rich Middle Eastern countries are booming, I also know that only a handful of pre-Fiat era Ferraris move in those directions.

Simply growing up in any major city in America or Europe with a passion for cars meant one grew up exposed to Ferraris. As a peripatetic hippie fresh from the Great White North (Canada), I saw my first Ferrari, Superfast s/n 08253, on the streets of San Francisco in 1969.

Ferraris for the very few indeed
Three years later, I saw my first Daytona in Garden Grove, California, and I was hooked. I lived the American dream of upward mobility and easy credit, and in two years I owned a Daytona. The same socio-economic environment simply does not exist in the emerging markets.

No Russian, Chinese, or Indian business moguls, dignitaries, or movie stars drove Ferraris throughout the 1950s, ’60s, and ’70s, and the few Middle Easterners who did hid their wealth from the underclasses. In countries like Iraq or Iran, only the likes of Saddam Hussein’s sons or the Shah drove Ferraris, and only with a bevy of armed guards in tow.

Even today in parts of the Middle East, southeast Asia, Mexico, Brazil, and Venezuela, driving a Ferrari in the wrong areas is an invitation to be robbed, kidnapped, or assassinated. Today’s Chinese entrepreneurs, Russian oligarchs, and Middle Eastern oil millionaires may be seen on the news or at the best hotels and restaurants stepping out of an Enzo, 599, or F430 Spyder, but the old cars are unknown.

Taxes that kill markets
Additionally, import taxes are punitive and also vary wildly from country to country. Import duty in the U.S. is a modest 2.5%, and all cars built before 1982 are eligible for entry to the U.S. without meeting our insane Environmental Protection Agency and Department of Transportation laws. Import duty into England is 5% for the most collectible Ferraris that are at least 25 years old, with no VAT. Any Ferrari less than 25 years old faces a 10% duty, plus a VAT that ranges from 17.5% to 19.6%, depending on the country.

Germany, France, and Italy are at 19%, so England has become the clearing house for Ferraris on their way to Europe, as the English VAT is European Economic Community-transferable. Go to Brazil, a nation of car lovers, and the import duty is 105%, and no car less than 30 years old can be imported, period.

Want to import a Ferrari into India? Forget it unless you can get an import license, which you probably cannot, regardless of your political or economic connections. If you are able to get a license, the duty is a breathtaking 165.72% As for China, if you are willing to pay an 85%, tax you can get anything in. But in the current Chinese culture, anyone with money wouldn’t be caught dead in a “used” car. As for Russia, the customs import duty is a rational 15%, with a 20% VAT tacked on. Because Russia is geographically close to and directly connected with Europe, a horde of used Mercedes and American SUVs have made the journey, but, to date, very few classics—mostly Mercedes-Benz 300SLs.

London, Spain, and the South of France

A few areas with a long history of exotic car ownership by ultra-wealthy Russians, Hong Kong-based Chinese, Indians, Southeast Asians, and Middle Easterners, have been London, the South of France, and Marbella, Spain. Many who felt the need for speed but didn’t want to worry about being robbed, kidnapped, or assassinated, bought majestic walled estates in London or along the Cóte d’Azur and satisfied their auto ambitions far from the prying eyes of both the common folks and the tax collectors.

As for the long range, India will almost certainly never have a sizable exotic car market, be it new or used, because the traffic chaos and lack of highways make Ferrari ownership impractical. China, on the other hand, is building a modern highway system and ring-roads around the major cities. China is also building race tracks, and in a decade there may be enough venues and a broad support base to sustain a collector car market.

Russia is moving fast. Cars have quickly become a fashion statement there, and anything that sets you apart is chic, with the current car to have being a new Maybach 62 at a modest €800,000 (about $1.2m), with duty paid. The Middle East has no lack of money, but with 120-degree days in the summer months, big and comfortable is better than small and fast, and so Ferraris are a plaything to own but to use sparingly.

The need to build an infrastructure
Human nature dictates that Russians, Chinese, and Middle Easterners are more comfortable doing business with their own markets. So markets will only really develop when Russian or Chinese billionaires add a classic car department to their Shanghai or Moscow Ferrari franchise. Then they’ll add knowledgeable technicians, service, and parts, and perhaps organize rallies and tours for local enthusiasts. At the moment, they’re too busy selling new cars to worry about old ones.

In time, I predict that Russia and China will develop a classic car market, as did Japan, but don’t expect a wave of Russian, Indian, or Chinese entrepreneurs to drive up 275 GTB/4 prices anytime soon.