What’s in that Shed 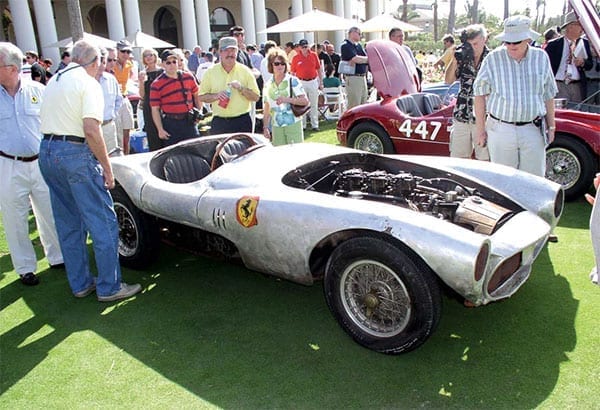 What’s in that Shed

Those of us Ferrari enthusiasts approaching vintage status ourselves like to reminisce about the “good old days” of the 1960s and early 1970s.

Then came the first Ferrari boom, in the mid 1970s. It began just after the 1973 gas crisis, when Daytonas (long the benchmark for Ferrari pricing) stuck at a hard-to-sell $15,000. Luckily, Ferraris rode the crest of a recovering economy from 1974 to 1979 and moved back into the public eye as new events such as the Monterey Historic Races became the place for rich guys to show off their toys.

But in 1979, Fed Chairman Paul Volker exercised his mandate to crush inflation by cranking up interest rates to 21% and threw the economy into a tailspin. When rates eased in the mid-1980s, the economy recovered and the infamous 1985–89 second Ferrari boom occurred. For example, in 1985 this writer purchased the ex-Briggs Cunningham 375 MM S/N 0372 in a garage in Riverside as a project car for $70,000.

BARNS REPORTED EMPTIED
During the 1980s run-up in Ferrari prices, the garages and barns of America, Europe, and South America were supposedly emptied of collectible Ferraris by dogged teams of hunters. The consensus was that the most prestigious or collectible Ferraris had all been found and restored. Wrong.

The slump lasted until 1996, when Jacques Swaters and Jean Sage started the Shell Historic Ferrari Challenge in Europe, creating a whole new series of factory-sanctioned races for eligible historic Ferraris—a new version of the Monterey Historics, if you will. The dot-coms provoked another worldwide economic boom and prices soared in the third Ferrari boom, with 250 GTOs, 250 TRs, and 375 MMs doubling and doubling again in price as wealthy enthusiasts clamored for “cool cars” to flog on European circuits.

Such a rising tide eventually lifts all Ferraris, though not at the same time or rate. The American economy has been riding a ten–year wave of prosperity and now the long-neglected bottom and middle range of the Ferrari market has finally gained strength.

MAYBE I’LL NEVER RESTORE IT
These unrestored, unloved, and lost-for-decades cars continue to come to market, often without much fanfare. This time, the sellers, or their kids or grandkids, are Internet friendly and very aware of what their cars are worth—and that they need to make a move. Most of these long-term owners turned down substantial offers for their cars in the late ’80s, betting that prices would go higher.

Now these owners are 15 years older and acutely aware it took this long for prices to rebound. They’ve also come to terms with the idea that they’ll never get around to restoring their baby. These days they’re worried about estate planning and not leaving loose ends for their families to tie up.

The frustration for barn-find buyers is that the owners may be aware of the value of their cars in a restored state, but are in absolute denial as to what it would cost, in today’s dollars, to bring their crusty old treasures to this state. These Ferrari-owning curmudgeons often believe that a “great” paint job was $2k back in 1970, and simply refuse to believe it can be $25k today.

The rising tide continues to reveal no lack of long-lost relics, including a pair that were black holes in the databases of virtually all Ferrari historians. In late February, this author purchased 246 GT S/N 2618 and tracked down 250 PF Cabriolet S/N 1891, looking like it had just emerged from the black swamp.

With barn finds, you have to be the ever-so-patient guy standing at the door when the long-term owner finally decides it’s over. Once they decide to sell, an even harder part of the purchase is convincing owners that their cars aren’t worth market value. And you have to keep reminding yourself of that as well and not let the red mist of acquisition cause you to forget about the 30 years of rust, body damage, destroyed upholstery, and seized mechanicals ahead of you once you have the car in your garage.

There are still cars in barns waiting to be found. It’s why I scour the local papers of every small town I pass through. And once you actually land the car, and bring it back to life, your rewards are almost Lazarus-like. But it’s not a fast or a cheap process. If you want fast, go buy a done car. If you want cheap, you should probably be reading another magazine