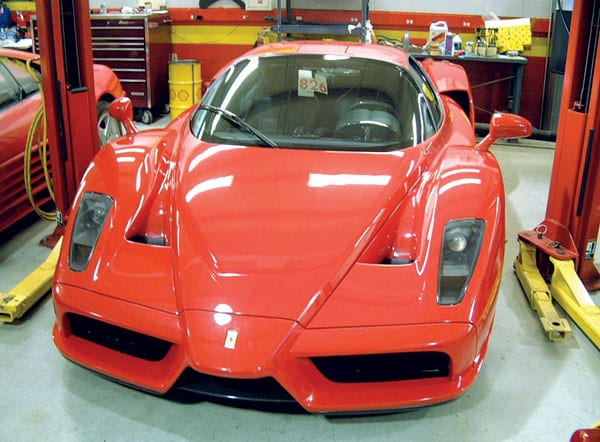 In late January, the owner-principal of an authorized Ferrari dealership emailed an unusual question: “Do you think there is a retail price difference between an Enzo with 990 miles and one with 1,015 miles? We have a service customer with an Enzo who is concerned our road testing after the service put it over 1,000. I am not attempting to use your answer or quote you.” Further correspondence explained that the Enzo had come in with a dead battery, and the multitude of computer sub-systems had to be rebooted. The computer had not “cleared” on the first twelve-mile test drive, so a second test drive was necessary, hence the 25 miles.

Much ado about nothing
My initial thought was that 25 miles difference on a car with 990 miles is a mere 2.5% difference, and on a car worth some number around $1.2m, 2.5% would be much less than the bargaining factor in a potential sale—a negligible amount. Additionally, anyone who has his Ferrari serviced knows that it will be test driven, unless the owner requests otherwise. Since the car had 990 miles when dropped off, there was little question that it would probably pass 1,000 miles as part of the service. I saw this email as yet another example of how claims of diminution in value have gotten out of control, driven in part by ever-hungry lawyers.

As an obsessive-compulsive who seeks consensus, I forwarded the Enzo email to five friends who are experts in the exotic car world. First up was James Harris, a Corona Del Mar-based attorney who has spent 20 years specializing in exotic car litigation.

The lawyer’s view
Attorney Harris replied: “My legal opinion is that there is no claim or legal case against a repair facility that puts 25 miles or so on an Enzo, increasing the odometer reading from less than 1,000 miles to a little over 1,000 miles. Firstly, market conditions evidence that the resale value of the Enzo is decreasing. The minimal added mileage does not affect the decrease in value. Second, any legitimate automotive repair facility will thoroughly test drive the vehicle under repair to insure it is operating properly. This involves putting the car through its paces. Accordingly, an increase of 25 miles on the odometer is reasonable. In my opinion, no credible expert in the field of the Ferrari market would testify that the increase in mileage on this Enzo had diminished the vehicle’s fair market resale value. Any claim for diminution in value would be without factual and legal merit.”

An appraiser’s opinion
My second email went to Lance Coren, a frequent expert of choice for evaluations and appraisals in high-end automotive litigation. Coren is a Multiple Certified International Automotive Appraiser. He replied: “The issue of inherent diminished value for a specialty exotic vehicle whose odometer reading increased by 25 miles during servicing and testing can be analyzed accordingly. A low-mileage exotic collectible vehicle possesses value based on its desirability and its amount of usage. The lesser the use, the more value and marketability the vehicle has. A usage variable of 25 miles is of no significant concern, even with the fact that the odometer reading exceeds 1000 miles for the first time.

“The primary issue is whether or not the marketability of the subject vehicle has been negatively affected by the odometer jump and reading of over 1,000 miles. It can be easily ascertained that the marketability and valuation of the vehicle will not change with this type of use. A prospective wholesale or retail purchaser will not be affected in a bid to purchase this vehicle. If the change in odometer status was more substantial (i.e. +500 miles), the issue of inherent diminished value could possibly be argued successfully.”

Yet another Mike Sheehan
The third forward of the email went to Mike Sheehan (no relation, honest), a Phoenix-based appraiser who is involved in high-end appraisals related to the Scottsdale auctions. His answer went on for five pages and was a greater overview of the entire issue of diminution in value. He raised two new points. His first question was: “Is it a leased car?” If the car was leased, the service customer was not the owner, as the honor of ownership belongs to the leasing company, and the service customer had no right to claim diminution. His second question was: “How many owners?” If the car had multiple owners, that alone will diminish the value and make a complaint for further diminution a difficult point to claim, especially from a second or third owner.

Another dealer’s position
The fourth comment came from the sales manager at another authorized dealer, who replied: “We can accept at face value the owner’s opinion that 1,000 miles is a mental set point. It is a given that some buyers have a preference for miles well under 1,000. But it would then follow that an Enzo with 990 miles would be of little interest to such a buyer, as the car could only be driven 11 miles before falling into the dreaded over-1,000-mile category. The buyer of a 1,015-mile car, however, knows he could safely enjoy driving the car hundreds of miles before reaching the next mental plateau of 2,000 miles. In my opinion, the 1,015-mile car would be easier to sell, as there would be a larger universe of potential buyers. Further, based on my 39 years of experience selling Ferraris, I feel there would be no difference in market value between a 990-mile car and the same car with 1,015 miles. I also think (the owner) has only himself to blame for not giving the dealer explicit instructions to put no additional miles on the car.”

And last but not least…
The fifth forward went to Paul Rosenfield, a now-retired lawyer from Safeco Insurance with 30 years experience in auto related litigation. He replied: “Unless the owner specified this vehicle NOT BE DRIVEN for testing due to its value and rarity, I do not believe there is a status change in this vehicle. If the owner did so specify, then the shop should have honored the request or refused the job. Still, a diminution argument will be a very hard sell. I do not believe adequate arguments or ‘proof of facts’ can overcome the current falling market and show loss of value relative to vehicle testing. I cannot see someone making a valid value argument when, at 990 miles, there is no room left to test the vehicle for maintenance or test it during a pre-purchase inspection were the car for sale, as both would probably result in the car exceeding 1,000 miles.”

The reality check
It is standard practice for exotic cars dealers to call other dealers for a second opinion when offered an unusual car that’s hard to value or an unusual business situation, such as this one. Such calls are called “reality checks” and every dealer makes them, every day. While my immediate reaction to the 990-mile to 1,015-mile quandary was that there was no diminution in value, I was pleased to hear that every professional I spoke with was unanimous in that opinion. It’s too bad so much time is wasted on so much ado about nothing.