Where are Ferrari’s Future Classics? 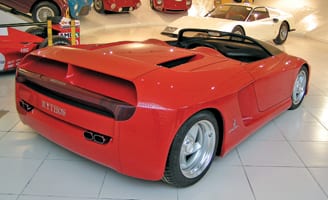 Where are Ferrari’s Future Classics?

One of the frequent questions that crosses my desk is “Which current Ferraris will become classics like the Lusso, 275 GTB, or any of the collectible earlier Ferraris?” Sadly, the answer is very few, if any.

Win on Domenica, sell on Lunedi
From the first Ferraris built in 1947, the Ferrari reputation was built on wins at the Mille Miglia, the Targa Florio, the Tour de France, Le Mans, and other races. Almost every early Ferrari was a V12 one-off, built to the whim and taste of its owner and the race department. One-off race cars soon evolved into one-off coachbuilt cars, expressions of Ferrari’s racing tradition, of la dolce vita exclusivity and wealth.

Too many to be collectible
Today, thanks to emerging markets in Asia and the Middle East, Ferrari now builds about 6,000 cars a year. The collectibility of anything, be it Ferraris, coins, stamps, or whatever, is inversely related to the number built, and far too many 550s, 575s, and other modern Ferraris have been built to ever be anything more than nice cars.

Consider that in 1960 Ferrari built 306 cars, including 62 SWBs, many of which continued the Ferrari tradition of winning races and championships. In the last decade, Ferrari constructed 3,600 550s and almost as many 575s, of which only twelve were factory-built 575 GTC race cars, and none of them had any significant race results. Since the days of the Competition Daytona and the 512 and 512 M Sports Prototype cars, Ferrari has focused on Formula One, and so the relationship between today’s GT cars and Ferrari’s great wins is hardly anything more than both of them carrying decals of the Prancing Horse.

Fast cars with room for kids
The V6 and later V8 Ferraris may have made Ferrari a household name and expanded Ferrari ownership, but they are anything but collectible. The V8s have continued Ferrari’s racing tradition, doing well with the 360 Challenge and 360 GTC cars. But other than one-marque, Ferrari-only series or the occasional National Championship, V8s have never dominated the world racing scene like their V12 forebears. And the many post-Fiat Ferrari 2+2s—from the 365 GT4 2+2 to the 612—are simply fast cars with room for kids.

The glory days ended with Fiat in 1970
Gone forever are the days of the early 166/195/212/225 and 250 coachbuilt cars, which evolved into the 375 Americas, the 410 and 410 Superamerica, 500 Superfast, and finally the 365 California Spyder. The days of top-of-the-line Ferraris being built to the client’s order, with special engines, unique body features, and personalized interiors ended in the late 1960s and early 1970s with Fiat-introduced mass production and headlight, bumper, smog, and safety regulations.

Newer cars are excluded from key events. Early cars, from the 166s up to the Boano, Ellena, and TdF, are eligible for the Mille Miglia or Colorado Grand, while later cars, such as the 250 GTO, 275 GTB/C, Comp Daytonas, and 512 M and 512 S Sports Prototype cars, are eligible for the Monterey Historics or Pebble Beach. But eligibility dates do not move forward every year, so virtually all the cars built beyond Fiat’s 1970 ownership are excluded from these events.

Only for the Sultan of Brunei
If coachbuilt cars are no longer made to the client’s order as a matter of course, a number of pre-production prototypes are built for every production Ferrari. In addition, a few ultra-wealthy clients have had existing Ferraris modified by Pininfarina. Potentially collectible examples include a few special factory prototype cars, such as the Pinin, a 512 BB-based one-off four-door Ferrari with a front-mounted flat-12 built in 1980, or perhaps some of the Pininfarina specials built for the Sultan of Brunei, including the Mythos, a Testarossa-based special, or the Venice, one of perhaps a half dozen 456 GTs rebodied as a station wagon. None would be eligible for judging, as no class exists for such cars, but each would certainly be display novelties.

In today’s vintage racing world, the only raceable modern exceptions from the mid-1970s and 1980s are the few privateer 365 BB and 512 BB Le Mans and IMSA cars, the 25 factory-built BBLMs, or just over two dozen Michelotto 308s built for the track or rallying.

Fast forward to the 1990s, and the 333 SP, F40 GT, F40 LM, and F40 LM GTE are collectible, but have only become so in the last two years as the prices of early cars soared. Unlike the 1950s, 1960s, and 1970s racers, which are user-friendly for a touring event or a cruise to the local weekend car show, the 333 SP and F40 racing variants are impractical for anything but the race track and are not for the faint of talent or wallet.

Successfully rebuilding the past
As for the future, pre-Fiat Ferraris can be restored by an experienced shop, and virtually any part is or will continue to be available or can be made by a machine shop. Older Ferraris such as the Lusso were evolutionary, in that many parts were interchangeable throughout the ten-year 250 series span, so the same basic parts fit many cars. In theory, Ferrari’s new Clienti support program will continue to provide future parts for the modern cars, as somebody has to help to pay for the F1 budget.

Reality, however, is that every manufacturer immediately ignores cars as soon as the federally-mandated support period is over. They want you to buy a new one, not fix an old one. Ferrari SpA has always answered the question, “What is the best/favorite/most exciting Ferrari?” with “The next one,” and so today’s Ferraris will tomorrow require lots of expensive electronic parts that have become “unobtanium.” The complexity of today’s electronic wizardry will only increase future maintenance issues, making ownership and usability problematic.

Rarity still drives the Ferrari market
After the boom of the late 1980s and crash of the early 1990s, I wondered if the next generation of collectors would still covet the Ferraris I grew up with, the 8,000 or so pre-Fiat Ferraris built from the 166 to the 365 GTB/4. Needless to say, the economic boom of the last ten years has proven the timeless desirability of these early cars, with virtually all the more sporting examples of the 1950s, 1960s, and 1970s Ferraris immensely sought-after across the globe.

So, the bottom line is this: Of the 120,000 Ferraris built since Fiat entered the picture in 1970, only a few pre-production prototypes, the racing Boxers, the Michelotto-built 308s from the 1970s and 1980s, and finally the ultra-fast 333 SP and F40 race variants have become collectible, and those only in the last few years.

A number of ultra-wealthy enthusiasts have built modern Ferrari supercar collections, each with a 288 GTO, an F40, an F50, and an Enzo, usually garaged with a few older Ferraris and a dozen or so other modern super-exotics. While the 288, F40, F50, and Enzo are the best of their time and true supercars, none will ever be judged for its unique one-off bodywork, race-winning history, or special features.

Rather, the collectibility and value of the 288, F40, F50, and Enzo are judged by how complete the books and tools may be, by the small number of owners they have had, and by the scarce miles they have been driven. How strange to attribute value to the non-use of cars that were made to be driven.