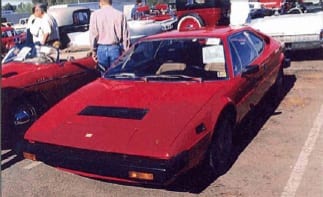 Which is the best Ferrari for a first-time owner? The answer is not simple, because of the financial resources, intended use and old-versus-new preferences of the potential buyer.

But regardless of their financial situation, everyone starts somewhere. I’ve broken the market into six segments, ranging from “You’re better off buying a Honda S2000 (i.e. under $25,000)” to the ultimate price tier, what I’ll call “My daddy was Bill Gates’ personal trainer,” or, “The Sultan of Brunei is my uncle.”

For less than $25,000, our first-time owner has few options. A very nice 308 GT4 is the choice for those who can live with the cheesewedge-in-search-of-a-mouse Bertone styling. A decent 308 GTBi or GTSi, hopefully one that isn’t ingesting a few quarts of oil every 100 miles, is the choice for those who still remember watching Magnum P.I. and want a car everyone knows is a Ferrari. If you must have a V12, can live with the “”Fiat on steroids” Pininfarina styling and think that having back seats for children is a neat idea, a 365/4 2+2 or a 400 is your choice.

Be aware that with these bargain-basement Ferraris, nearly every one will be a study in deferred maintenance, making a pre-purchase inspection mandatory.

Let he who writes the check make the choice. For V8 fans, the best choice is a late-series 1994-95 348 Spyder. The many problems that plagued the early 348s were resolved by the time the final cars were built.

Buyers are generational, as almost every Daytona buyer is over 40, while the 550, a far more user-friendly car, attracts both the seasoned Ferrari veteran and the prancing-horse newbie. Daytona buyers tend to think the raucous exhaust, heavy low-speed steering and feeble air conditioning (like three mice breathing across an ice cube) is their dream come true. 550 owners simply expect that their cars will be at least as reliable and easy to live with as a Honda Accord, except with more expensive tune-up bills. New Ferraris are much better cars than old Ferraris, but are they really better? That’s a question best discussed late at night, over a few bottles of cult California cabernets.

One fact is beyond dispute. Good Daytonas simply won’t be getting any cheaper, and in fact seem to be on an upswing. 550s, as new as they are, are still depreciating and are going to do so for the next decade.

HOW ABOUT HALF A MIL?

Up to $500,000 we are into 275 GTB/4 and 365 GTS/4 Daytona Spyder territory for those who prefer the old cars, and F40s and 550 Barchettas for those want something modern. Value-wise, 275 GTB/4s, Daytona Spyders and F40s have all gone up in value recently. On the other hand, thanks to 30 Euro-model 550 Barchettas being released by the EPA in a 60-day period, all hitting the market at the same time, their values are still sliding downwards.

All of these but the Barchettas are blue-chip collectibles and will garner a prominent position at any Ferrari gathering they are brought to. The 550, as an inventory-clearing special, is still struggling to find its proper valuation in the marketplace.

A checkbook that has room for six zeros puts us into a serious Ferrari collector car category. Only two “new” cars fall into this very rarified category: F50s and, for those lucky enough to have been on the “A” list, a new Enzo.

Both these new-generation cars have performance that will make an F-16 pilot feel at home, should be relatively easy to live with and have a fairly sustainable market value. However, they will never achieve the status of the ’50s and ’60s dual-purpose Ferraris that were driven on the street and then raced. The early cars cut their teeth in fierce competition, and their exploits have become legendary. The newer cars are better in every way, except that they are really just F1 poseurs, cars that can go faster and stop better than you can imagine—but for what purpose?

As for collector cars around the million-dollar mark, the appreciation of the Euro has priced some of my favorites out of that category. Last year, I know a fellow who was looking for Mille Miglia-eligible cars (built prior to 1958 and with period history) and picked up a 500 TRC and an 857 Monza. Another acquaintance of mine snagged a 250 TdF and a 250 SWB. All of these cars were under $1,000,000.

But all of these cars have seen 20-percent-plus appreciation in the last six months, through currency swings alone. Today, a first-time million-dollar spender is limited to the coachbuilt cars such as a 410 or 400 Superamerica or Superfast, or perhaps the 166, 195, 212 or 225. Toss in a 250 alloy Boano with some race history for good measure. The serious racer’s choices are limited to a 512 BB LM or, perhaps, a 1965 shortnose 275 GTB/2 “Cliente Competizione.”

MY UNCLE IS THE SULTAN OF BRUNEI

It’s a little strange to think of a novice collector spending millions of dollars on a car, but we see similar phenomena all the time in the art market. The nouveaux riche go to their first auction and buy everything in the catalog that’s by a famous painter, just to be able to lord it over their friends. I personally know several collectors, recently rich and recently into cars, who simply tell their brokers, “Get me the best.” They are often more interested in having bragging rights at Warren Buffet’s next Sun Valley get-together than how their cars actually perform; they’re collecting famous Ferraris the way entomologists acquire and skewer to a display board rare insects.

First-timers should be aware that any Ferrari will cost more than you can possibly imagine to maintain and will break and aggravate you in ways that you never even thought possible.

But they are Ferraris, each with a sound that makes the small hairs on the back of your neck stand up when it fires up and that causes passers-by to look up and wonder what is making that astounding sound.

Pick the level you can afford to play at and dive in. Recall the famous Road & Track article from the ’70s which stated, “Buying a Ferrari was the nicest thing I ever did for myself.”